How the U.S. Navy Plans to Find and Destroy Enemy Sea Mines 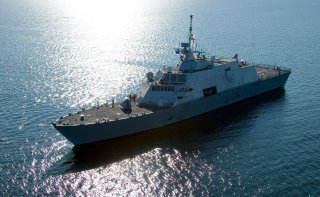 Sea mines are deadly. They explode on impact or from sensors buried beneath underneath the ocean floor. They can also be used in both shallow and deep water passageways to deny or complicate access to vital areas. In fact, sea mines are increasingly available to militaries around the world.

The presence of sea mines and fast proliferation among hostile countries continues to push the U.S. navy’s ongoing effort to craft modern mine warfare plans and engineer drones able to find and detonate them before they can hit manned vessels.

This Navy approach, and its corresponding warfare technologies, will in part be executed by elements of the Navy’s Mine Countermeasures (MCM) Mission Package for the Littoral Combat Ship. This includes MH-60 helicopters, deck-mounted drones such as the Fire Scout, surface sweeping drone boats such as Textron’s Unmanned Influence Sweep System and deep diving drones engineered to detect mines buried beneath the ocean floor, such as the Knifefish.

There are a variety of ways in which the Navy’s mine-warfare strategy is quickly becoming more manifest, including video-guided undersea drone explosives, unmanned weapons, sensors and advanced airborne countermine technologies engineered to destroy mines beneath the surface.

Other undersea drones, such as Raytheon’s Barracuda, are engineered to operate semi-autonomously undersea, using guidance systems to find enemy mines and then dispatching explosives to destroy them without requiring human intervention. Some of the more recent innovations include Northrop’s AQS-24 which uses underwater laser side-scanning.

There are various types of mines that need to be found, to include more visible or “find-able” mines. These have a strategic and operational value, even if they are less covert. Of course, visible mines could be missed by an enemy or overlooked in some way, yet they can function as weapons intended to “deny” an enemy access to a strategically vital location or asset. Covert mines, by comparison, would likely function with the more narrowly-configured intent to avoid detection and simply harm an enemy without being detected.

The overall MCM system is slated to be operational by 2022, however some elements are already available.