How the U.S. Navy Is Rapidly Accelerating Its Naval Drone Programs 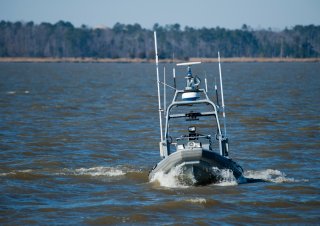 In what could easily be called a drone explosion, the U.S. Navy is massively accelerating its drone programs by developing, testing, and integrating a growing range of surface and undersea unmanned systems. Notably, these drones are being designed to be networked with one another and operate at various levels of autonomy.

Some systems have already been delivered to the Navy, and others are rapidly evolving prototypes now undergoing refinement, testing, and rapid integration.

“We want to start getting some of these things in production, right? We want to start transitioning prototypes into programs of record,” Capt. Scot Searles, Unmanned Maritime Systems program manager, told an audience at the 2022 Sea-Air-Space Symposium.

The unmanned platforms being developed by Searles and his team are designed to closely align with the Navy’s Distributed Maritime Operations (DMO) strategy. The DMO strategy, which has been in development for several years now, is intended to help the future force excel in a changing threat environment. DMO will accomplish this by making the Navy dispersed, better networked, and more capable of long-range surveillance and attacks. Searles explained that virtually every Navy strategy document highlights the crucial need for manned-unmanned teaming development.

“Every single one of those documents in some way shape or form talks about manned-unmanned teaming and the need to develop our technology and deploy these unmanned capabilities. So, we start talking about unmanned platforms and the role we're going to play in the future fleet—every single one of our top-level Navy strategy documents speaks to the architecture that unmanned will bring as an enabler for affordability, capacity, force distribution,” Searle said.

Some of the key programs are well evolved, including the medium unmanned surface vessel and the Barracuda mine-hunting drone, while others are earlier in the process. The Navy is also making great progress with its Orca extra-large unmanned undersea vehicle, a submarine-like undersea system designed to detect enemy movements, perform surveillance in high-risk areas of the undersea domain, and potentially even carry weapons. Other well-evolved systems include the large diameter unmanned undersea vehicle, also called the Snakehead, and the smaller Razorback surveillance and mine-hunting drone. Other systems are earlier in the process, but many are being accelerated through a carefully modified and improved acquisition process.