If the Marines Goes to War in the Pacific, Take a Look at What They’ll Ride into Battle 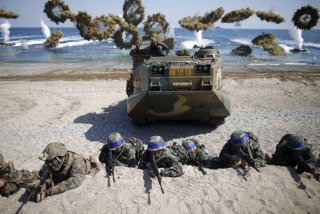 Imagine this scenario in the not so distant future: The United States is at war in the Pacific. U.S. Marines deployed on the USS Wasp are in the amphibious assault carrier’s well deck. About 145 of the Marines slowly board a ship-to-shore connector, essentially a large amphibious landing vehicle that rides over the surface of the ocean on a cushion of air. They’re being deployed to an active war zone, to relieve other Marines already on a beachhead on some far-flung island in the South China Sea. They are the second wave.

Though of course functional, this scenario could play out in real life. Tensions in the South China Sea are at all-time highs—and to ensure they are prepared, the Navy bought the Marine Corps some new equipment: a new Ship-to-Shore Connector (SSC).

Fresh Off the Presses

A few days ago, the Navy announced an award to Textron Systems for new SSCs. These improved SSCs are beasts—when fully loaded, they can carry seventy-four tons of men and supplies at a rapid thirty-five knot an hour clip. Part of the new SSCs strength is their redesigned skirts, which reduces both weight and drag over the surface of the water, according to Textron.

These new SSCs “offer increased reliability and maintainability, as well as meet requirements of increased payload and availability,” and are expected to remain in service with the Navy and Marine Corps for the next thirty years, according to Textron.

The Navy was equally positive about the future acquisition, saying "The LCAC replaces the existing fleet of legacy LCAC vehicles, and will primarily transport weapon systems, equipment, cargo, and personnel of the assault elements through varied environmental conditions from amphibious ships to and over the beach.”

The new SSCs are just a part of the Marine Corps’ rapid modernization efforts in the past several years. In addition to adopting the Heckler & Koch HK416 rifle, in service with the Marines as the M27, the Marines are also in the middle of nearly unprecedented restructuring.

The Corps recently announced the retirement of all tank battalions, marking a huge shift for the branch. In addition, the Corps decided to gradually phase out artillery and other non-amphibious platforms in favor of gearing towards a war in the Pacific that will likely be defined by many small groups of highly mobile sea-based Marines armed with an array of anti-ship missiles. In this anticipated fight, decentralized command will play a crucial role—as will shipping, of both supplies and men.

For supplies, quick-and-dirty solutions like those pioneered by narcos delivering narcotics to far afield may play a part in the future. But in the ship-to-shore niche, SSCs will be of utmost importance.

Speculation has run wild in recent days about thaw a high-tech flight in the Pacific would look like—and what the implications are for the United States Marine Corps. One thing is sure though. A dust-up in the South China Sea would likely see Textron’s SSCs.