Imagine This: Donald Trump Jr. vs. Hunter Biden In a TV Debate 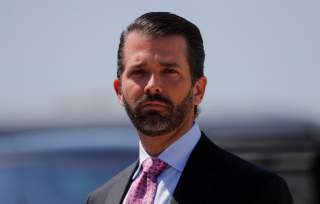 In a potential battle of political scions, Donald Trump Jr., son of the sitting president, has challenged Hunter Biden, son of the prohibitive favorite for the Democratic presidential nomination, to a television debate. The subject would be grifting, corruption, and the profiting off public office that both men have been accused of.

“So, you know what would be great? I’ll let you host it,” Trump told Jim Vandehei, co-founder and CEO of Axios. “You moderate a debate between Hunter Biden and myself. We can go full transparency, we show everything. And we can talk about all of the places where I’m supposedly grifting but Hunter Biden isn’t.”

Don Jr. and the other Trump children have been accused of profiting off the presidency since their father’s election. Examples include President Donald Trump staying at Trump-brand facilities while on official duties, allowing foreign actors to buy rooms at Trump Hotels in an attempt to buy influence with the administration, and involving his children, who are still private actors in the business world, too close to the creation of policy procedures.

Hunter Biden’s overseas business dealings received national attention last year when President Trump attempted to have the Ukrainian government investigate his dealings. Trump requested this of the President of Ukraine, with the intention of withholding military aid from the country unless this request was fulfilled. This action led to the president’s impeachment by the House of Representatives in December, and his acquittal by the Senate in February.

The origin of this request was Hunter Biden’s acceptance of a position on the board of Burisma Holdings, a Ukrainian energy company. Despite not speaking Ukrainian or having experience in the energy field, Hunter received tens of thousands a month. At the time his father, Joe Biden, was vice president and heavily influential in formatting Ukraine policy.

“It would be like ‘The Great Who Made More Off-Dad Debate,’” shot back Vandehei, interpreting the suggestion as bravado.

“I don’t know that I’ve profited off the presidency,” responded Don Jr., confident that any problem of corruption was wholly one-sided. “The media likes to do this sort of false equivalence; ‘You’re doing this, you’re doing that. We’ve stopped doing any new international business deals when my father won the presidency.”

“I’d one hundred percent debate him,” Don Jr. said. “Let’s talk about who profited off of whose public service. Happy to do it. Let’s make it happen.”