IMF to Provide $1.4B in “Emergency Aid” to Ukraine 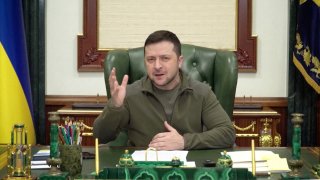 The executive board of the International Monetary Fund (IMF) announced on Wednesday that it had approved $1.4 billion in “emergency financing” for the Ukrainian government, to help compensate it for the economic impact caused by Russia’s invasion.

The statement also singled out the Russian government for criticism, arguing that it had created a “massive humanitarian and economic crisis” in Ukraine.

“[Ukrainian] financing needs are large, urgent, and could rise significantly as the war continues,” IMF Managing Director Kristalina Georgieva said in the statement, speculating that Ukraine would enter a deep recession later in the year.

The ongoing war has led to thousands killed on both sides and has pushed as many as two million Ukrainians to flee their homes. The IMF noted that it had also led to significant infrastructure damage within Ukraine, sharply constricting the country’s economic output even if peace were restored immediately.

The $1.4 billion disbursement was arranged under the IMF’s “Rapid Financing Instrument” (RFI), a program created to quickly respond to crises in developing nations. The international organization claimed that the funding would primarily be used for short-term needs, and was intended to be followed by donations from other nations.

In December 2021, as Russian troops built up along Ukraine’s borders, the IMF granted Kyiv $700 million in addition to the $2.7 billion it had received in “special drawing rights” – essentially a fictional currency created by the IMF as a substitute for gold – in August.

While Ukraine’s economy has been devastated by the war, Russia’s economy has also buckled under pressure from international sanctions imposed in the week after the invasion. Among other penalties, Russia’s central bank and largest financial institutions were ejected from the SWIFT bank transfer authentication system, making it impossible for them to engage in commercial transactions with the rest of the world. The United States and the European Union also sanctioned several key Russian industries and imposed penalties against the Russian ruble, leading it to collapse in value.

In spite of the sanctions, Russian officials have committed to continuing the invasion.