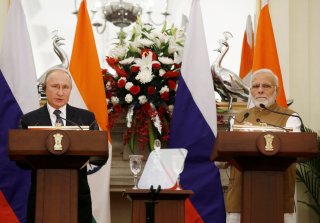 Modi, per the report, called on Putin to "move onto a path of peace” and cited the importance of “democracy, diplomacy, and dialogue.”

The meeting took place on the sidelines of the Shanghai Cooperation Organization summit in Uzbekistan.

"We will definitely get a chance to discuss how we can move onto the path of peace in the coming days, I will also get an opportunity to understand your point of view," Modi said, per a readout released by the Indian government.

Modi’s statement followed news last week that Chinese president Xi Jinping has “questions and concerns” about the conflict in Ukraine, according to Putin. This development was also revealed at the summit in Uzbekistan, which represented the Chinese leader’s first trip outside of China since the start of the pandemic.

"China is willing to work with Russia to play a leading role in demonstrating the responsibility of major powers, and to instill stability and positive energy into a world in turmoil,” Xi said, per Reuters.

According to Reuters, Putin thanked his Chinese counterpart for his “balanced” position.

"We highly value the balanced position of our Chinese friends when it comes to the Ukraine crisis," the Russian president said.

"We understand your questions and concern about this. During today's meeting, we will of course explain our position, we will explain in detail our position on this issue, although we have talked about this before,” Putin added.

The summit followed reports of Ukraine taking back large swathes of territory. According to Reuters, Ukrainian president Volodymyr Zelensky stated that Ukrainian forces have reached the eastern bank of the Oskil River, pushing even further into the northeastern Kharkiv region.

"The Ukrainian Armed Forces have pushed across the Oskil. From yesterday, Ukraine controls the east bank," the Ukrainian military said in a Telegram statement.

"Perhaps it seems to some of you that after a series of victories we now have a lull of sorts,” Zelensky said in an address over the weekend. "But there will be no lull. There is preparation for the next series ... For Ukraine must be free. All of it.”

President Joe Biden also addressed the developments in the war during a 60 Minutes interview on Sunday.

"Winning the war in Ukraine is to get Russia out of Ukraine completely and to recognize the sovereignty. They’re defeating Russia," Biden said. "Russia’s turning out not to be as competent and capable as many people thought they were going to be.”