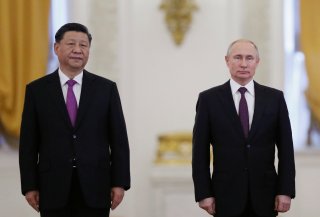 Chinese and Russian presidents Xi Jinping and Vladimir Putin are expected to meet in person on the sidelines of the annual Shanghai Cooperation Organization (SCO) summit in Tashkent, Uzbekistan, next week, marking the first in-person meeting between the two leaders since the start of Russia’s invasion of Ukraine in late February.

The meeting was confirmed by Kremlin aide Yury Ushakov, according to Russia’s state-run TASS news agency. It comes as Beijing and Moscow have sought to expand their political and economic ties in the face of increasing opposition from the Western world, roughly six months after the two leaders’ declaration of a “no limits” partnership during the 2022 Winter Olympics in Beijing.

On Tuesday, Russia’s state-controlled Gazprom energy giant announced that it had negotiated a contract with the Chinese government to receive payment for natural gas in yuan and rubles rather than U.S. dollars, the standard currency for the global hydrocarbon trade. The push to de-dollarize comes amid sweeping international sanctions against Russia, cutting the country off from Western financial networks and limiting its ability to exchange dollars. Although Russia has largely weathered the worst effects of Western sanctions, they have inflicted significant damage to its economy, which is projected to shrink by as much as $250 billion by the end of the year. Russia has pursued growing commercial ties with China as an alternative to engagement with the West, and China has also sought to increase its exports to Russia as a way of bolstering its own struggling economy in the wake of expansive COVID-19-related lockdowns.

The visit to Uzbekistan also marks Xi’s first foreign trip since the start of the COVID-19 pandemic. In addition to attending the SCO summit, the Chinese leader is scheduled to tour central Asia, beginning with Kazakhstan, which shares the longest border with China of any of the post-Soviet Central Asian states. The meeting also occurs within a month of the Chinese leader’s expected re-election to an unprecedented third term as the general secretary of the Chinese Communist Party, making him the first leader since Mao Zedong to rule the country for longer than a decade.

China has officially remained neutral on Russia’s invasion of Ukraine, declining to support or condemn it. Despite this official policy, Chinese commentators and the country’s Foreign Ministry have framed the conflict as an inevitable result of U.S. military expansion into Eastern Europe, and Chinese censors have also encouraged this perspective on the country’s social media networks.