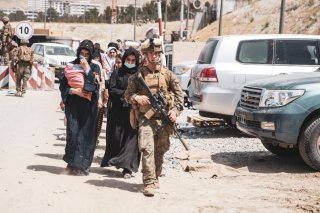 The Special Inspector General for Afghan Reconstruction (SIGAR), the task force assigned to review U.S. spending in Afghanistan, said in its quarterly report that it believes the abrupt collapse of the U.S.-backed Afghan government was in large part due to the deal the Trump administration made with the Taliban in February 2020.

The report, which was released on Wednesday, argued that the deal had been the “single most important near-term factor” explaining the Afghan security forces’ disintegration during the Taliban’s offensive in the summer of 2021. It described the impending departure of U.S. forces as a “catalyst” that intensified Afghan forces’ existing problems, including persistent low morale and a perception that the government’s defeat was inevitable.

Gen. Sami Sadat, a former Afghan National Army (ANA) general interviewed by SIGAR investigators, claimed that the signing of the deal—in which American negotiators promised that U.S. troops would withdraw from the country by May 2021—had an outsized “psychological impact” on “the average Afghan soldier,” motivating them to enter “survival mode and bec[ome] susceptible to accepting other officers and deals.” In many cases, these deals consisted of mass surrenders to advancing Taliban forces with the promise that troops who gave up their arms would be allowed to keep their lives and return home. Consequently, although the Afghan security forces allegedly employed 300,000 troops at the beginning of August—outnumbering Taliban militants roughly five to one—that number quickly dwindled during the group’s offensive.

A second Afghan officer claimed that his troops “knew they were not the winner” in the conflict after the deal had been negotiated, although it took the Taliban more than a year to capitalize on its advantage in morale due to the continued presence of U.S. troops and the outbreak of the COVID-19 pandemic.

Although the report criticized the Trump administration’s deal with the Taliban, it also highlighted severe structural deficiencies in the Afghan security forces, including its consistent failure to become self-sustaining and end its reliance on the United States, the appointment of loyalists of President Ashraf Ghani rather than competent military commanders, and the failure of the Afghan leadership to implement an overarching security strategy. It argued that the U.S. mission in Afghanistan was “disconnected from a realistic understanding of the time required to build a self-sustaining security sector.”

The Taliban’s takeover of Afghanistan took advantage of these weaknesses, sweeping the group to power in Kabul before U.S. troops had finished departing the country. In the final two weeks of August, an immense U.S.-led humanitarian evacuation effort resulted in the airlift of more than 100,000 vulnerable Afghans from the Kabul airport, although hundreds of thousands more were left behind.