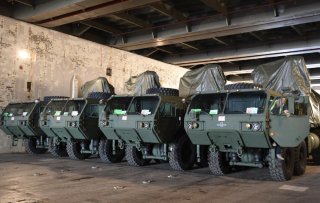 This is an important step that has been in the works for years. Iron Dome is combat-proven and has made thousands of interceptions over the last decade, mostly against missiles fired from the Gaza Strip. Israel has increasingly improved the system. For instance, it has recently added a multi-layered integrated air defense drill using the Iron Dome and David’s Sling air defense systems to confront drones and cruise missiles. This is important because the threats against military forces are constantly changing. Countries like Iran and militias they support in the region use mortars, 107-millimeter katyusha rockets, as well as drones and larger grade rockets. Iran also has an arsenal of cruise missiles and long-range ballistic missiles. The United States installed an air defense system called C-RAM in Iraq in 2020 to defend against rocket attacks.

Israel’s Ministry of Defense announced the delivery of the second Iron Dome battery to the United States on January 3. The battery consists of several Oshkosh vehicles as well as the launchers and other equipment and sensors. The multi-mission radar that the system uses is developed by ELTA, a subsidiary of Israel Aerospace Industries (IAI), and the command and control system (BMC), is developed by mPrest. All of this is mounted on around a dozen of the Oshkosh vehicles. Iron Dome is a relatively short-range system so while the system can defend cities or critical infrastructure, to defend a large area a country would need to acquire a number of the systems.

The Israel Missile Defense Organization (IMDO), in the Directorate of Defense Research and Development (DDR&D), of the Israel Ministry of Defense, delivered the second of two Iron Dome Defense System batteries to the U.S. Army. This illustrates the close cooperation between the United States and Israel. In recent decades the United States has supported Israel’s air defense systems, with funding initially for Arrow program and then David’s Sling and also support for Iron Dome, anti-tunnel technology, and counter-drone technology. It’s part of a wider network of connections between the United States and Israeli defense companies, as well as Israeli defense technology and the United States. For instance, Rafael’s Trophy system is on U.S. Abrams tanks, Israel’s Elbit Systems makes helmets for F-35 fighter pilots and IAI makes the wings for F-35 fighter jets.

Israel’s Defense Minister Benny Gantz said that the delivery of the Iron Dome to the U.S. Army once again demonstrates the close relations between the Israel Ministry of Defense and the U.S. Department of Defense. He also emphasized how the delivery represents “the effectiveness of the system against various threats and the excellent technological capabilities of Israeli industries. I am confident that the system will assist the U.S. Army in protecting American troops from ballistic and airborne threats as well as from developing threats in the areas where US troops are deployed on various missions.”  With Israel heading to elections it is not clear how much longer Gantz will be defense minister; however, he has worked closely with his U.S. counterparts since his appointment last year. He is the leader of Israel's Blue and White party.

In August 2019 Israel and the United States signed a deal for the procurement of the two batteries. These batteries will be employed in the defense of US troops against a variety of ballistic and aerial threats, reports in Israel say. The road ahead for the system in the United States is complex. The US wants to acquire mobile short-range air defense systems and it has seen what threats like the kind Iranian-backed militias in Iraq can manifest. Procurement is slow and these kinds of agreements take years. In Iron Dome’s favor is the fact that Israel has been recalibrating it to face emerging threats. However, it was also designed to fit in with Israel’s multi-layered defense, including the David’s Sling and Arrow 3. For the United States, the resulting configuration could see it paired with Patriot systems, THAAD and C-RAM or other new systems that are being developed, such as lasers and the U.S. Marines Air Defense Integrated Future Weapons System (MADIS). The MADIS MK2 uses Rada radar from Israel. The Light Marine Air Defense Integrated System (LMADIS) uses a directed energy weapon. The U.S. procurement of new systems is slow and different services want different capabilities in air defense. For now, the U.S. Army will be using the Iron Dome. The Marines reportedly looked at the system in 2019.