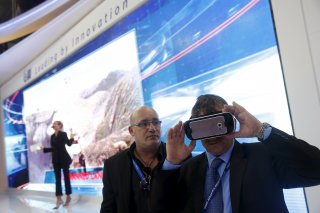 Israeli companies headed to the Dubai Air Show in mid-November hoping to build on growing ties between Israel and the Gulf. The Air Show is a major regional event where countries are showcasing their new technologies. Russia is presenting its new fighter jet—dubbed Checkmate—and will also show off its unmanned aircraft. Major Israeli companies such as Israel Aerospace Industries (IAI) and Rafael Advanced Defense Systems are attending the show. On the one hand, the attendance is historic because Israeli companies can go to Dubai openly this year. Another aspect of the show is that Israeli companies are leaders in several areas related to air defense, radars and artificial intelligence.

For instance, Rafael Advanced Defense Systems declared that it would “showcase some of its most advanced operational and combat-proven aerial defense solutions which are supported and enhanced by artificial intelligence. Rafael, along with IAI, played a key role in work with the United Arab Emirates’ Group 42 prior to the signing of the Abraham Accords in 2020. The companies partnered during the pandemic to work together on solutions.

In Dubai, Rafael Advanced Defense Systems showcased a MIC 4 AD, a unified command and control system, as well as Drone Dome, a system for countering unmanned aircraft. Drones are an increasing threat in the region. Iranian-backed groups have used drones to attack ships, U.S. facilities in Iraq and Syria and even to target the Iraqi prime minister. Rafael also showcases Spyder, a low-level surface-to-air missile system. Although not on display, the region is increasingly interested in Iron Dome the Israeli air defense system that has proven successful against rockets, drones and other threats. The United States recently announced a test of Iron Dome in Guam, where it is deployed. Israel has supplied the United States with two batteries of Iron Dome and Rafael partners with Raytheon in the United States to build parts of the system. Reports in early November said Morocco was interested in the system, although the chances of Israel selling the system in the Middle East, considering sensitive security ties with the United States, would be unlikely.

Israel’s IAI called the attendance at Dubai a “historic first.” CEO Boaz Levy said that “a year after the signing of the Abraham Accords, IAI is thrilled to participate in the Dubai Airshow and to broaden cooperation with business partners in the Gulf region.” He highlighted how IAI had already attended CyberTech in Dubai and how IAI was looking forward to “develop new defense and civilian solutions with our partners in the UAE and broader Gulf region, and together, to create a brighter future.”

IAI is a leader in civilian and defense aviation, as well as space systems. IAI plans to expand its strategic collaboration in the region by signing new cooperation agreements with local companies. It is currently working on an agreement involving cargo conversions with the United Arab Emirates’ Etihad Engineering and on aircraft maintenance with Bahrain’s Gulf Air. The company does B777 cargo conversions as well as structural and avionics upgrades, multi-mission tanker transport (B-767 conversion for aircraft refueling), and is showcasing drones and air defense systems in Dubai.

Additionally, Nir-Or, a subsidiary of IMCO Industries, presented the next generation of its Large Area Display for glass cockpits at the Dubai Airshow. “Specially designed for airborne applications, LAD provides a dynamic viewing range, from full sunlight reading to night operation with NVG compatibility,” the company said in a statement. Nir-Or has developed displays for the Israeli Air Force for the F-16 Fighting Falcon, F-15 Eagle, and AH-64 Helicopters.

Key players from the world of aviation and UAE relations with the world converged in Dubai too. Aerospace Industries Association and the US-UAE Business Council were participants. This has importance for the UAE at a time when the Middle East is in transition. The UAE recently sent its foreign minister to Syria to meet with Syrian regime leader Bashar al-Assad. The historic meeting is the first in a decade and signals a new opening by Gulf states to work with Syria. This comes after Syria was shunned during the civil war. Today countries such as Egypt, Jordan and the UAE see possibilities in working with Syria and possibly reducing Iran’s role there. Syria’s regime is backed by Russia as well as Iran. Russia has seen growing opportunities in the Middle East through its successful backing of Assad and its appearance at the Dubai show is an example of this.

For Israel, the Air Show is symbolic of a plethora of new joint exercises that are taking place between the United States and Israel as well as Israel and the Gulf states. In early November the amphibious transport dock ship USS Portland departed Eilat in Israel after a joint training with the Israelis and the 11th Marine Expeditionary Unit. Also, Israel hosted the United States during the Blue Flag exercise where eight air forces from around the world gathered for training. F-35 fighter jets were present as they have been for recent Israeli joint drills with the United States, Italy and the UK. American participants came from Spangdahlem Air Base in Europe. In general, Israel is now trying to do more joint training with U.S. Central Command units. As part of that Israel conducted a joint naval drill with the United Arab Emirates, Bahrain and the United States in the Red Sea in the second week of November. The “five-day exercise includes at-sea training aboard amphibious transport dock ship USS Portland (LPD 27) focused on visit, board, search and seizure tactics. The training will enhance interoperability between participating forces’ maritime interdiction teams,” according to a press statement issued by 5th Fleet Public Affairs. In recent months, naval units from U.S. Central Command have worked with Jordan as well as Saudi and UK forces.