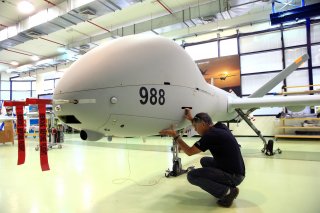 Israel’s top drone makers continue to innovate to give their large surveillance drones more capabilities that will aid them in confronting threats in the coming years and give the unmanned vehicles more flexibility. On Sept. 16, as Israelis prepared for a second unprecedented nationwide lockdown against the coronavirus, Israel Aerospace Industries announced that its large Heron UAV had landed at Ben-Gurion International Airport.

The Heron became the “first UAV to land in an international airport alongside commercial flights occupying civilian airspace.” This is an important milestone because large high-altitude long-endurance (HALE) drones and their medium-altitude counterparts (MALE) generally cannot fly in civilian airspace. This has been one of the mainstays of the conflicts where drones have participated in the last two decades. During the global war on terror, the United States generally used the MQ-9 Reaper and the MQ-1 Predator drones over countries like Iraq, Afghanistan, and also Yemen, Pakistan and Somalia, either on clandestine missions or to conduct surveillance and strikes in ungoverned areas where terrorists operate. The sight of large drones flying over European cities or landing on civilian runways is not normal but is believed to be the next place that drones will operate more frequently.

Israel Aerospace Industries in Israel (IAI), whose Heron is its largest drone and a major export, said that the Heron took off from Ein Shemer airfield and landed at Ben-Gurion and then flew back to Ein Shemer. Ben-Gurion Airport is the major civilian airport in Israel, handling most of the country’s arrivals and departures. During the coronavirus crisis traffic at the airport has decreased. The Heron model and the Heron TP have been leased or exported to countries such as Germany, Greece, Singapore and other countries, according to reports. However Israeli drone-makers, such as Elbit Systems, IAI, Aeronautics and others have seen their overall market share decline globally as Chinese and other competition increases. In addition, the United States has begun to consider exports of more large drones, including armed versions, something that the United States refrained from doing over the past few decades. Having drones qualified to fly in civilian airspace would give major operators a reason to acquire more of them for multiple missions.

Towards that end Elbit Systems rolled out the Star Liner, a version of its Hermes 900, that is designed to operate in civilian airspace. It is fully compliant with NATO’s Standardization Agreement known as Stanag 4671, which means it can be integrated into civilian airspace. Elbit said in mid-September that its Hermes 900 had recently completed a series of flight demonstrations for the Maritime and Coastguard Agency (MCA) in the UK. The test was to illustrate the drone’s ability to conduct search and rescue operations.

The large drone flew off the coast of Wales for two weeks in September and went beyond line of sight “into unsegregated and uncontrolled airspace, in full alignment with the UK Civil Aviation Authority,” the company said. Elbit said this was a success and a step forward.

Drones, like the Hermes 900, are ideally suited for search and rescue because they can remain aloft for many hours and can fly through difficult weather to conduct programmed search patterns for vessels or people at sea. This is preferable to sending out large numbers of aircraft and ships with people, rather than using valuable search and rescue teams only in the most necessary locations, so as to conserve their strength and energy during a search. A drone doesn’t get tired and if something catastrophic happens, a drone doesn’t have people on board.

Elbit notes that the Hermes 900, with its fifteen-meter wingspan, is already deployed with more than a dozen countries. “The company offers extended life-saving capabilities with its recently launched Hermes 900 Maritime Patrol configuration with inflated life-rafts for detection, identification and saving the lives of survivors at sea. It was revealed that this configuration was delivered to an undisclosed customer in South-East Asia,” an Elbit spokesperson said. Martin Fausset, CEO of Elbit Systems UK noted that “we are pleased to have had the opportunity to showcase our enhanced search and rescue capabilities to the MCA this week. The Hermes 900 is perfectly equipped to deal with the needs of the Maritime and Coastguard Agency and we are proud to be able to support them as they continue with their vital, life-saving work.” The UK’s coastguard sees remotely piloted aircraft as a big part of its work to help save lives.

Israel is a drone superpower and continues to innovate with its line of drones. Most of these drones are tailored for various tasks and fit into a classification system that has been developed over the last decades, with larger drones for certain missions and smaller tactical drones being pioneered for other types of roles on the battlefield. The key question for drone-makers is whether existing models have everything that operators need, and merely need to be jammed with the latest radar, electro-optics or even search and rescue equipment, or whether new designs are needed.

For instance, IAI makes a series of drones in its strategic category of drones, such as the Heron TP and other members of the Heron line that can fly for forty-five hours at thirty-five thousand feet for up to one thousand kilometers from base. Extended ranges in the TP push that envelope on some capabilities. Takeoff weight is some thirteen hundred kilograms. Its smaller Searcher models weigh 450 kilograms and can fly for 20 hours up to 350 kilometers from base up to 21,000 feet. By contrast, the Hermes 450 from Elbit weighs 550 kilograms and can fly for 17 hours at 18,000 feet while the larger Hermes 900 weighs almost 1,200 kilograms, and can fly for 36 hours at 30,000 feet. In a sense, these are comparable to the MQ-9 Predator and MQ-1 Reaper flight times, distances and heights. Ostensibly Chinese competitor drones like the Wing Loong II and CH-4 are similar and China has pitched them as filling the same need countries would get out of the U.S. and Israeli models. The United States and Israel don’t export to the same countries that China might export to, such as Pakistan, or the models that these countries want may not be available.

The question for operators today is getting these drones to the next level in terms of capabilities and tasks. The U.S. Air Force, for instance, has its eyes set on a $7.4 billion MQ-9 Reaper drone contract that will be awarded in the next few years. The contract would allow a contractor to build up to thirty-six aircraft a year. Putting drones to work in civilian airspace or using them for search and rescue missions could allow them to fill important niches that they haven’t been widely employed in before. The world of expensive large drones has generally meant long order times and major investments for operators. NATO only recently received its first handful of Global Hawk surveillance UAVs for its Sigonella base. More drones are required for maritime and border security in Europe, especially when it comes to issues such as migration. All of this means that drone-makers will continue to innovate and Israel’s new efforts with the Heron and Hermes 900 represent part of that innovation.