Israel's Secret (Nuclear) Weapon in a War Against Iran: Its Forgotten Navy? 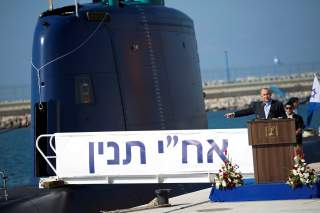 Iran’s bold summer offensive, involving military support for Houthi insurgents in Yemen and drone strikes against Saudi Arabia, has alarmed Jerusalem to the prospect of an Iranian surprise attack.

Tehran, for its part, continues to feed Israeli anxieties with a steady stream of belligerent rhetoric. Earlier this week, Iranian Revolutionary Guards (IRGC) Commander Maj. Gen. Hossein Salami announced that Israel can, and will, be destroyed: “This sinister regime must be wiped off the map and this is no longer … a dream (but) it is an achievable goal.”

How would a military confrontation between Israel and Iran play out? Much has been written on the state of Israel’s air force and army, but comparatively, little attention has been paid to the third, oft-forgotten branch of the Israeli Defense Forces (IDF): the navy.

The smallest constituent part of Israel’s armed forces, the navy plays a surprisingly vital role in protecting Israel’s territorial interests and guaranteeing the integrity of its nuclear deterrent. The strategic nucleus of the IDF’s navy is its fleet of six German-made, diesel-electric submarines from the Dolphin and Dolphin 2 classes. Most or all of these vessels are widely believed to be capable of carrying nuclear warheads in the form of Popeye Turbo cruise missiles, a variant of Gabriel anti-ship missiles, or modified Harpoon anti-ship missiles. This nuclear-armed submarine fleet is thought to be the cornerstone of the IDF’s second-strike capability; namely, Jerusalem’s capacity to retaliate against a nuclear strike with a devastating nuclear response of its own. The Dolphin 2 submarines are aided in their second-strike role by a new Air Independent Propulsion System (AIP), allowing them to stay submerged off the coast of the Arab states and potentially Iran for up to eighteen days.

The IDF navy also operates a small coterie of surface ships, whose primary task is to defend Israel’s Mediterranean and Red Sea shores from small-scale infiltration and smuggling attempts. Israel’s most powerful surface vessels are three Sa'ar 5 small corvettes, fielding both Gabriel and Harpoon missiles as well as Barak 8 surface-to-air missiles. But the operational bulk of the Israeli fleet is based around ten Sa’ar 4.5 missile boats; Israel’s primary naval means of defending its shores against large-scale maritime incursions, the Sa’ar 4.5 ships proved their worth after destroying eight Egyptian and Syrian vessels during the Yom Kippur War.

This is not to say that Israel’s navy lacks any offensive purpose, however. Among Israel’s most elite special operations units, the Shayeter 13 (“Flotilla 13”) commando group has been involved in numerous sabotage, reconnaissance, and boarding operations hundreds of miles off Israeli shores. Shayeter 13’s most recent declassified mission was Operation Full Disclosure, the ambitious raid of an Iranian freighter that was transporting rockets and small arms rounds from Iraq to Port Sudan.

While not as large or well-funded as its ground and air counterparts, Israel’s navy is a lean and relatively efficient enterprise that fulfills a surprisingly wide range of vital Israeli security needs including nuclear deterrence and forward reconnaissance. There is room for further development, however; as Iran continues to produce new warships at a rapid pace, the viability of Israel’s maritime missile defenses will hinge on the success of the next-generation Sa’ar 6 corvettes that will be delivered by 2024.