Japan and Russia Clash Over the Disputed Kuril Islands 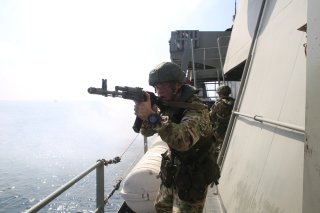 At a recent press conference, Japanese chief cabinet secretary Hirokazu Matsuno stated “Russia has issued a warning that it will carry out firing practice from February 8 in the area to the southeast of Kunashir Island.” This statement was corroborated by TASS, a Russian state news outlet. Mr. Matsuno added that “we view the increase of Russia’s military presence on the four Northern Territories (which Japan refers to as the southern part of the Kurils) as unacceptable.” Matsuno also called the drills a “navigational hazard” for the area.

Kremlin spokesman Dmitry Peskov insisted the drills should not be a “matter of concern” for Japan.

Military preparedness drills in the Kuril Islands will be conducted throughout February. It is unknown how many military personnel are slated to participate in the exercises, which will reportedly entail countermeasures against strike and reconnaissance drones. Russia’s last round of Kuril drills took place in November 2021 and involved S-300 V4 surface-to-air missile systems.

The Kuril Islands are a volcanic archipelago located in Russia’s Far East. As part of the 1945 Yalta Agreement signed by Winston Churchill, Joseph Stalin, and Franklin Delano Roosevelt, the islands were promised to the Soviet Union in return for entering the Pacific War against Imperial Japan. Tokyo lays claim on the archipelago’s four southernmost islands, which it calls its “Northern Territories.” Russia rejects these claims outright. The Kuril Islands dispute has kept Japan and Russia from concluding a peace treaty to formally mark an end to WWII-era hostilities.

Rahm Emanuel, U.S. ambassador to Japan, said in a video address on Monday that Washington recognizes Japan’s sovereignty over the Northern Territories, adding that "Russia's disregard for the sovereignty of others is also not new, nor is it limited to the Northern Territories.” Emanuel reaffirmed U.S. support for the efforts of "the Japanese and Russian governments in trying to achieve a long overdue peace treaty.” Russian foreign minister Sergey Lavrov said in January that any peace treaty between Russia and Japan must acknowledge the results of World War II, including Russia’s claims to sovereignty over the Kurils. "We are certain that a peace treaty, since it is to be signed not in 1945, but in the 21st century, cannot be confined to just one phrase: ‘The war is over.’ It should demonstrate in reality the diversity of today’s relations and open up new prospects," Lavrov added.