Japan and the U.S. Team Up to Sink Ship During RIMPAC Exercise 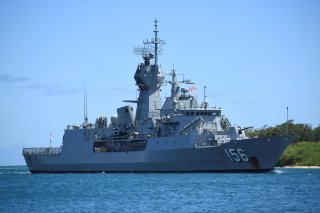 As a part of the United States multinational Rim of the Pacific (RIMPAC) naval exercise, country participants in the exercise fired upon and sank a decommissioned U.S. Navy ship.

The statement added that “with oversight and coordination by the multinational combined task force, the SINKEX enabled partner nations to gain proficiency in tactics, targeting and live firing against a surface target at sea.”

“Alliances with partner nations are a key element to secure our regional stability and enhance our capabilities of deterrence and response in the Indo-Pacific region.”

As a part of Force Design 2030, the Corps is becoming a more decentralized, nimble force and one that can operate independently deep in the Western Pacific.

"The role of Marine Corps aircraft, alongside forces from our partners and allies in this SINKEX, is an awesome display of the versatile combat power the combined force brings to the fight," said U.S. Marine Corps Forces, Pacific Deputy Cdr. Brig. Gen. Joseph R. Clearfield, who serves as the Fleet Marine Force Commanding General and oversees all Marine Corps Forces assigned to RIMPAC.

"It was a bittersweet moment for me, having served aboard USS Denver during my career. But what a way for her to go out! This exercise shows the power of partnerships in the region."

The U.S. Navy explained that prior to sinking, decommissioned ships are thoroughly cleaned and prepared to neutralize any adverse environmental impact they might have. They are also sunk in at least 6,000 feet of water and at least fifty nautical miles from land.