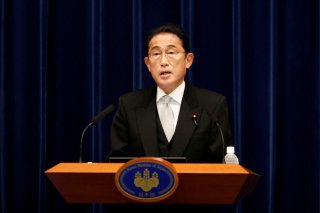 Japan’s Ministry of Defense announced early on Tuesday that North Korea had fired a ballistic missile over the country into the Pacific Ocean—a report that was quickly confirmed by U.S. and South Korean authorities monitoring Pyongyang’s missile program.

The defense ministry’s statement indicated that the missile was launched from North Korean territory at 7:22 am local time on Tuesday morning and passed over Japanese territory at 7:29. Although the missile is assumed to have fallen into the Pacific Ocean east of Japan, its whereabouts are unknown, and a search for missile debris in the Aonori and Hokkaido prefectures in northern Japan is reportedly ongoing.

A spokesperson for the Japanese government indicated in the aftermath of the launch that the missile had not caused any damage on the ground. However, the spokesperson’s statement strongly condemned North Korea, noting that the launches “go against … UN resolutions” and vowing that Tokyo would lodge a “strong protest” against North Korea after the incident.

The White House reinforced Japan’s complaint, describing the decision to launch a missile over Japan as “dangerous and reckless.” Shortly after the launch, U.S. national security advisor Jake Sullivan spoke with his counterparts in Japan and South Korea in two separate calls, according to a National Security Council statement.

“In both calls, the National Security Advisors consulted on appropriate and robust joint and international responses,” the statement read, claiming that Sullivan had “reinforced the United States’ ironclad commitments to the defense of Japan and [South Korea].”

The North Korean government’s most recent ballistic missile launch is the latest in a series of similar launches coinciding with Vice President Kamala Harris’s visit to South Korea in late September. However, the test marks the first time since August 2017 that Pyongyang fired a missile over Japan—an exercise that violates Japanese sovereignty and inherently creates the risk of disaster if the missile malfunctions and falls.

North Korea’s most recent round of missile tests comes amid growing tensions on the Korean peninsula, particularly following the accession to office of South Korean president Yoon Suk-yeol, who has largely eschewed concessions toward Pyongyang in favor of confrontation and closer ties with the United States. Tuesday morning’s test marked North Korea’s twenty-third missile test since the beginning of the year, and Western experts have warned that the country is also planning to test a nuclear weapon later in the year.