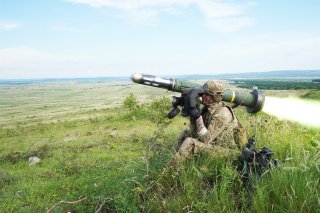 The Javelin, the United States' premiere man-portable anti-tank weapon, has been used to significant effect by Ukrainian forces battling Russian invaders, and Russia’s losses are staggering.

But, production of the powerful weapon is constrained by limited production lines and a parts bottleneck due to the global microprocessor shortage. Lockheed Martin, the defense company that builds the missile, has decided to increase production in anticipation of a future need ahead of government orders.

In an interview with CBS News, James Taiclet, Lockheed’s president, chairman, and CEO, elaborated on the company’s future production strategy.

“We are therefore, on our side, accelerating our investment in that factory and in our workforce there,” Taiclet explained. “So we’re already investing ahead of time to buy tooling, to expand the plant and also support our suppliers to get ready to ramp up production.”

“We can start turning up the heat now and ramping up production immediately,” Taiclet explained. He also added that Lockheed Martin anticipates an increased demand for “superior systems in large enough numbers.”

Though the Javelin has been in production for many years, it has become an emblem of the conflict in Ukraine thanks to its ability to consistently and reliably knock out Russian tanks and other armored vehicles.

And although the Javelin is closely associated with the conflict here, its utility in other potential theatres of conflict is likely to be high, a fact that Taiclet acknowledged. “We know there’s going to be increased demand for those kinds of systems from the U.S. and for our allies as well and beyond into Asia-Pacific, most likely too.”

Despite the Javelin’s usefulness, ramping up production of the anti-armor weapon won’t be immediate. Due to the overwhelming air superiority enjoyed by American forces, production of the weapon has contracted since it first entered service.

Ramping up production is a priority for the current administration and Congress. Legislators have queried the Pentagon if it would be advantageous to invoke the Defense Production Act, which would empower the president to order some defense companies to fill government tenders before other orders.

“It will be extremely helpful to have the Bipartisan Innovation Act passed, for example, because we do need to invest more in the infrastructure in the U.S. so we have domestic supply, especially in microprocessors,” Taiclet said.

“And so our production line can run today, but in the future we’re going to need more domestic capability and microprocessor, not only design but manufacturing, testing, etc., so that we have assured supply of those microprocessors in the future.”

Irrespective of how and when Javelin production ramps up, the anti-armor weapon’s battlefield utility has been clearly demonstrated. Casual observers of this conflict note that the Javelin’s applicability to other theaters—particularly the Indo-Pacific—is worth taking a closer look at.