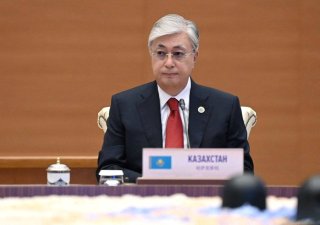 Kazakh president Kassym-Jomart Tokayev announced in a speech on Tuesday that his government would take in and help to resettle tens of thousands of Russian citizens fleeing a military draft—a move likely to antagonize Kazakhstan’s enormous northern neighbor and one-time imperial ruler.

“A lot of people from Russia have come here over the last few days,” Tokayev said during his speech, which was broadcast on the country’s public television network. “Most of them [were] forced to leave because of the hopeless situation [in Russia]. We must take care of them and ensure their safety.”

Before Tokayev’s speech, Kazakhstan’s interior ministry announced that as many as 100,000 Russians had crossed the two nations’ roughly 5,000-mile border—the second-longest land border in the world—to seek refuge from conscription. Kazakhstan is an attractive destination for Russians seeking to flee Russia, as Russians do not require a foreign passport to travel there, and Russian is widely spoken due to Soviet-era influence.

When Russian leader Vladimir Putin announced the new recruitment measures earlier in the month, he emphasized that they were intended to be a “partial” rather than a total mobilization. Putin claimed that the Russian defense ministry would only enlist 300,000 new troops, would only enlist reservists with prior military experience, and would restrict the conscription process to healthy men under well-defined age limits.

However, the implementation of Putin’s measures has been chaotic and highly unpopular within Russia. After Putin’s announcement, leaks from the Russian defense ministry indicated that the Kremlin intended to conscript four times more reservists than its official number. Several Russians above the age limits and with debilitating medical issues also reported receiving enlistment notices. The announcement reignited Russia’s anti-war protests, largely dormant since the passage in March of a harsh law prohibiting criticism of the military. An estimated 200,000 Russians have attempted to leave the country, and at least one military recruiter was shot to death by an irate draftee while trying to organize conscription.

Although most of the former Soviet constituent republics in central Asia have maintained neutrality on Russia’s invasion of Ukraine, Kazakhstan has loosely sided with Ukraine, and Tokayev indicated earlier in the week that his government would not recognize the result of four “referendums” promoting the annexation of eastern Ukraine into the Russian Federation. At the same time, the Kazakh leader emphasized in his remarks that he would continue cooperating with Russian authorities regarding border issues.

Tokayev has governed Kazakhstan since his longtime predecessor, Nursultan Nazarbayev, retired in 2019. During his tenure, he has attempted to reform the country’s political institutions, decreasing the power of the presidency and lessening the cult of personality surrounding Nazarbayev.