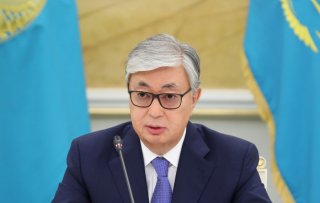 On Sunday, months after a series of riots in Kazakh cities led to a shakeup at the government’s highest levels and promises of political reform, Kazakhstan’s citizens overwhelmingly voted in favor of amending the country’s constitution to decrease the power of former President Nursultan Nazarbayev and overhaul the country’s political system.

The referendum, which was planned and implemented by Nazarbayev’s successor, current president Kassym-Jomart Tokayev, was approved with 77 percent of voters in favor. Turnout was estimated at 68 percent, according to Reuters.

The amendments proposed in the referendum would decentralize Kazakhstan’s political structures by transferring power from the presidency to the parliament and ensuring broader input in executive decision-making. Also included in the referendum were restrictions on members of the president’s immediate family from holding government positions—a significant problem during the tenure of Nazarbayev, who was perceived to have nepotistically appointed many of his family members to public service—and human rights measures, including a ban on the death penalty and the creation of a newly empowered and independent constitutional court.

Although Tokayev’s power would theoretically be weakened by the changes, he welcomed them, arguing that the “super-presidential” system was unwieldy.

“We are … laying the foundation for the Second Republic,” he said before voting began.

Kazakhstan’s unrest in January was initially triggered by the proposed elimination of government subsidies on liquefied petroleum gas, a form of natural gas commonly used in Kazakh cars. However, the initial protests soon spiraled into violent demonstrations over government corruption and inequality, including frustrations at Nazarbayev’s continued domination of the Kazakh political sphere. The protests ultimately resulted in more than 200 deaths and significant damage to infrastructure in Nur-Sultan, Kazakhstan’s capital, and Almaty, its largest city.

Although the protests were ultimately put down through the intervention of the Collective Security Treaty Organization (CSTO), the Russian-dominated Eurasian military alliance, Tokayev used the unrest as cover to reduce Nazarbayev’s power and purge many of his relatives from their positions in government.

Nazarbayev, who ruled Kazakhstan from its final years as a Soviet republic until his abrupt resignation in 2019, was widely criticized in the Western world for enabling corruption and creating a cult of personality around himself. Kazakhstan is not usually regarded as a democracy; although it officially has a multi-party system, Kazakh politics are dominated by the “Amanat” (formerly “Nur-Otan”) ruling party, which has historically been dominated by Nazarbayev.