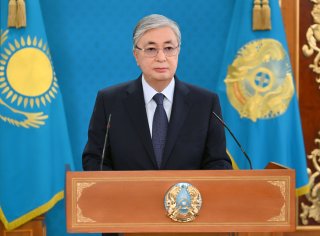 Kazakh president Kassym-Jomart Tokayev announced on Tuesday that he had approved a proposal to rename Kazakhstan’s capital city to Astana, its original name from 1998 until 2019, as part of an effort to undo the influence of longtime strongman Nursultan Nazarbayev.

Kazakhstan’s current capital city, known as Akmolinsk during the Soviet era and Astana following its independence, was renamed Nur-Sultan in 2019 in honor of Nazarbayev following his resignation from office. Although Tokayev, Nazarbayev’s protege, initially vowed to uphold his legacy and aligned himself closely with the former leader, he has since charted a more independent path—particularly following the “Bloody January” riots in the first week of 2022, which outside observers framed as part of a wider protest movement against corruption during the Nazarbayev era.

Following the protests, Tokayev dismissed Nazarbayev from his leadership of Kazakhstan’s powerful Security Council, removed several of his relatives and former loyalists from key positions of power and allowed for their prosecution on corruption charges, and publicly criticized his predecessor, arguing that he had overseen the creation of “a layer of wealthy people” who had become the targets of popular anger.

Nazarbayev, the final ruler of the Kazakh Soviet Socialist Republic, oversaw the country’s independence from the dissolving Soviet Union in 1991 and ruled until his surprise resignation in 2019. During his tenure in office, the Kazakh leader was widely criticized in the West for his authoritarian style of leadership and his construction of a cult of personality around himself. In 2010, Nazarbayev granted himself the title Elbasy, or “Father of the Nation,” a ceremonial rank theoretically higher than the country’s president. Following the riots, Tokayev revoked the title.

Zheldibay emphasized in the statement that the move was not intended to attack the former president, noting that Tokayev “[saw] Nursultan Nazarbayev’s decisive role in strengthening the modern statehood of Kazakhstan and [establishing] the capital as a historical fact.”

“Therefore, other landmarks named after the first president will keep their names,” he said.