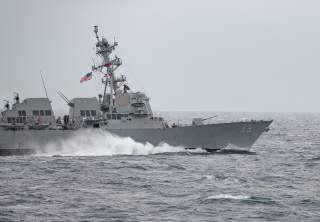 The U.S. Navy’s plan for a bigger fleet is collapsing before our eyes.

To save money, the Navy is canceling an effort to add 10 years to the service lives of its 27 oldest Arleigh Burke-class destroyers. The fleet announced the extension back in 2018.

Decommissioning the old Burkes after 35 years of use instead of 45 years means the fleet will lose a large proportion of its surface combatants starting in 2026 or 2027. First-in-class USS Arleigh Burke, DDG-51, commissioned in 1991.

A Burke is around 500 feet long, displaces around 9,000 tons of water and packs around 90 missiles in vertical launchers.

Defense News was among the first news outlets to report on the cancellation of the service-life extension. The change is the latest decision to weigh on the Navy’s plan to expand the fleet, which in early 2020 operates 295 front-line ships.

"To continue to protect America and defend our strategic interests around the world, all while continuing the counter terrorism fight and appropriately competing with a growing China and resurgent Russia, our Navy must continue to grow," Ray Mabus, Pres. Barack Obama’s long-serving Navy secretary, explained while announcing the expansion plan in December 2016.

The plan began to collapse in late 2019 as the Navy came to terms with flattening budgets, the rising cost of ship-construction and maintenance and the poor performance of several new ship types.

“Will we get to 355 ships?” Vice Chief of Naval Operations Adm. Robert Burke said in October 2019. “I think with today’s fiscal situation, where the Navy’s top line is right now, we can keep around 305 to 310 ships whole, properly manned, properly maintained, properly equipped and properly ready.”

In a sudden reversal following years of increasing ship-construction, the Navy in its $207-billion 2021 budget proposal asked for just eight new front-line vessels, down from 12 or 13 in previous years. The Navy also has proposed to decommission early four of its new Littoral Combat Ships as well as several cruisers and amphibious ships.

Amid the uncertainty, the sailing branch has delayed its annual shipbuilding plan and other force-structure projections, drawing rebukes from lawmakers who, in the absence of firm plans, increasingly dictate U.S. naval force-structure by way of annual appropriations.

“Service-life extensions can be targeted, physical changes to specific hulls to gain a few more years, or a class-wide extension based on engineering analysis,” Geurts’s testimony reads. “The Navy has evaluated the most effective balance between costs and capability to be removing the service-life extension on the DDG-51 class.”

The earliest Burkes -- 27 Flight I and early Flight II vessels -- have an expected hull life of 35 years, Defense News explained, citing internal Navy documents. USS Arleigh Burke’s hull life could expire in 2026 or shortly thereafter. Thereafter, the fleet could lose three or more Burkes annually for around a decade.

Later Flight IIA and Flight III destroyers have 40- or 45-year hull-lives. The Navy is still building new Flight III Burkes at a rate of around two per year. The service so far has ordered 77 Burkes of all flights.

With shipbuilding plans in chaos, the Navy increasingly is counting on small, cheap robotic ships to rescue it from a major contraction.

Acting Secretary of the Navy Thomas Modly in early December 2019 codified this policy in his “SECNAV Vector 1” memo, which called for “an integrated plan to achieve a 355 (or more) ships, unmanned underwater vehicles and unmanned surface vehicles for greater global naval power, within 10 years.”

USNI News was the first to report on Modly’s memo.

The Navy in its 2020 budget request asked Congress for the first installment on a $4-billion acquisition of 10 large unmanned surface vessels and nine unmanned submarines. Boeing is developing the robotic submarines, using its 51-feet-long Orca submersible as a starting point.

The sailing branch hasn’t yet selected a shipyard to build the unmanned surface vessels. The USVs could be similar to the Sea Hunter robot ship that the Navy has been testing since 2016. Sea Hunter is 132 feet long.

Under the Navy’s current rules, unmanned vessels do not count as part of the front-line fleet. That policy is likely to change.