Lavrov: A New Iron Curtain Is Descending Between Russia and Europe 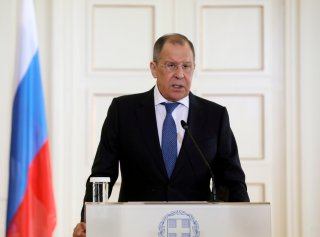 Russian foreign minister Sergey Lavrov alleged that a new “iron curtain” had formed between Russia in the West, invoking a Cold War-era phrase used to delineate the Western world from the former Soviet Union and its Eastern European client states.

“As far as an iron curtain is concerned, essentially it is already descending,” Lavrov told reporters during a press conference in Belarus. He added that Russia had cut diplomatic contacts with the European Union, though not with its constituent nations, after Russia invaded and annexed the Crimean Peninsula from Ukraine in 2014—a move that led to widespread condemnation and the imposition of sanctions in the West.

Although the Russian seizure of Crimea set the tone for the relations between Russia and Western Europe for the next decade, the Kremlin’s invasion of Ukraine has triggered far more wide-ranging changes to Europe’s security policies. In the immediate aftermath of the invasion, most nations within the European Union and NATO placed far more substantial sanctions on Russia at the outset of the conflict, sharply limiting its foreign trade and cutting off its access to deposits in the West.

Lavrov claimed that the crisis showed perfidy from the Western world, which he suggested was mainly controlled by the United States rather than European-based organizations such as the EU.

Lavrov’s remarks came following the conclusion of NATO’s annual summit in Madrid, in which the members of the military alliance vowed to continue their support for Ukraine until it reached a negotiated settlement with Moscow. The alliance also invited representatives from Sweden and Finland, both of which applied for membership in May. Although their applications were initially blocked by Turkey over their alleged support for Kurdish militant groups, Turkish officials agreed to approve the applications during the summit, making their accession into NATO in the coming year all but certain.

“Let them behave carefully,” Lavrov said of the new entrants, echoing comments from Russian leader Vladimir Putin that Russia would not seek to provoke conflict with either Stockholm or Helsinki but would ensure that Russia’s northern frontier remained defended. Finland’s border with Russia is less than 100 miles from Saint Petersburg, Russia’s second-largest city.