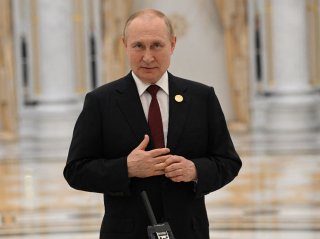 Russian leader Vladimir Putin accused the North Atlantic Treaty Organization (NATO) military alliance on Wednesday of displaying “imperial ambitions” by continuing to support Ukraine against the ongoing Russian invasion and enlarging the alliance by inviting Sweden and Finland to join.

The Russian leader’s remarks, made during the sixth annual Caspian Summit in Ashgabat, Turkmenistan, come one day after Turkish president Recep Tayyip Erdogan agreed to allow the two Scandinavian nations to enter NATO. The Turkish leader had earlier sought to block Stockholm and Helsinki’s admission, primarily over concerns that the two countries had supported Turkish-sanctioned Kurdish separatist groups.

In a “trilateral memorandum” between the three countries, however, Stockholm and Helsinki agreed to prioritize Turkish national security and committed to ending support for Kurdish groups, leading Turkey to sign off on the accession process.

Finnish and Swedish accession to NATO would mark the most significant security realignment in Europe since the end of the Cold War. Both Sweden and Finland have powerful militaries, and Finland’s entry into NATO would roughly double the alliance’s total border area with Russia. Although much of the Russo-Finnish border is located in dense forest territory within or near the Arctic Circle, the border also runs less than one hundred miles from Saint Petersburg, Russia’s second-largest city, potentially creating a major security headache for the Kremlin.

Putin dismissed the danger that the two nations’ accession to NATO would increase the likelihood of a conflict with Russia, claiming that he had no interest in expanding Russia’s invasion of Ukraine into other territories.

“With Sweden and Finland, we don’t have the problems that we have with Ukraine,” Putin said. “They want to join NATO, go ahead.” “But,” he added, “they must understand there was no threat before, while now, if military contingents and infrastructure are deployed there, we will have to respond in kind and create the same threats for the territories from which threats towards us are created.”

The Russian leader also observed that due to the increasingly hostile relationship between Russia and NATO, Moscow’s tensions with Stockholm and Helsinki would inevitably increase over their accession into the alliance.

The NATO summit in Madrid, to which Swedish and Finnish representatives were invited in advance of their formal accession process, has seen an unprecedented degree of unity against Russia’s actions in Ukraine. In its Strategic Concept document, the alliance described Russia as “the most significant and direct threat … to peace and stability in the Euro-Atlantic area.” In the same document, the NATO allies agreed to keep eventual NATO membership for Ukraine, an issue thought to be partially responsible for Russia’s invasion, on the table.