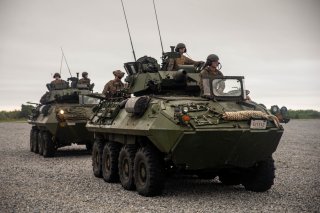 Eighty years ago, the U.S. Marine Corps stood up one of its most decorated and storied divisions:  the 3rd Marine Division. Also known as “The Fighting Third,” the Marine Corps activated the division on September 16, 1942, at Camp Elliot in San Diego.

The Marine Corps statement covering the anniversary explained that “since its inception, the 3rd Marine Division has primarily operated in the Indo-Pacific region. During World War II, it fought in the campaigns on Bougainville, Guadalcanal, Guam, and Iwo Jima where many Marines like CWO4 Hershel “Woody” Williams demonstrated extraordinary heroism on the battlefield.”

“We are honored to recognize and celebrate the anniversary of 3rd Marine Division and the service and sacrifice of the Marines and Sailors who have stood in these ranks and – war by war, battle by battle, and day by day – built the great legacy of fidelity, honor, and valor that we stand on today,” Maj. Gen. Jay Bargeron, the 3rd Marine Division Commanding General, said during an address given to Marines and Japanese Defense Forces.

Though the U.S. Marine Corps legacy is firmly rooted in the Indo-Pacific region, some of the 3rd Division’s more recent experience is in Southeast Asia.

“The troops I commanded in Vietnam [and] the ones that I commanded throughout my career have always been top of the line, well trained, disciplined, motivated, and flexible,” said Col. Robert Modrzejewski. Colonel Modrzejewski earned the Medal of Honor in Vietnam during one of his multiple tours with the 3rd Marine Division.

“Marines are adaptable … the technology [and] the weapons are more sophisticated [today] … as far as ability, I can’t tell the difference.”

Today, the U.S. Marine Corps is laser-focused on the Indo-Pacific region with one adversary in mind. Rather than preparing for more long land warfare campaigns that defined the Corps’ involvement in the Middle East, the service is now retooling for a fight against the Chinese military.

The Marine Corps statement ended on an emphatic note: “We remain a Fight Now force today. We stand ready – along with the rest of III MEF, our Allies and Partners, and the entire Joint Force – from mainland Japan to the Philippines and beyond,” Bargeron said.

“Together, we operate within range of clear threats to peace and security; and we do so with great confidence – a confidence that is rooted in the commitment we share with our Allies and Partners, in the trust of our fellow Marines and Sailors, and in the legacy forged by those who went before us.”