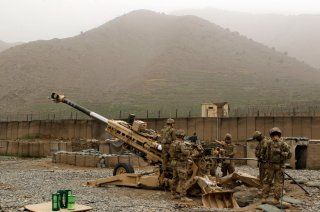 The U.S. Army is taking a close look at the war in Ukraine, and their conclusion is clear. They want more long-range precision fire—and they want it soon.

During a recent House Armed Services Committee meeting, Rep. Adam Smith asked, "What are the systems that are going to put you into position to win that fight like the fight that's playing out in Ukraine?"

The conclusion: precision, long-range fire like the Long-Range Precision Fires system will be absolutely necessary to fight—and win—against a peer enemy in the Indo-Pacific. In other words, China.

The Army’s chief of staff, Gen. James McConville, outlined the Army’s future strategy. "I'll start with our number one priority, which is the long-range precision fires and I equate those to being the arrows that we have, and it starts with hypersonics," McConville explained.

"They have great range, great speed and [are] very precise, and that gives us some capabilities. The second priority is a mid-range capability. That gives us the ability to sink ships, the third capability is a precision strike missile, which is developing right now. It'd be a land-to-land system, it's going to be 500 kilometers or greater. And it also is going to in the near future have the ability to sink ships," he added.

The Long-Range Precision Fires system is not a single weapon but rather four individual systems that will push the distance at which the Army can target enemy positions.

The first of these is the XM1299, an extended-range cannon artillery system that will increase the M109 Paladin’s range to beyond forty miles. Second, the Precision Strike Missile, a surface-to-surface tactical missile system, could hit targets at ranges of 300 miles. Third, the Typhon missile, which is currently in development, is an anti-ship missile that can hit targets 600 miles away. Lastly, the Long-Range Hypersonic Weapon system—also known as Dark Eagle—will likely have a range greater than 1,700 miles.

Douglas Bush, assistant secretary of the Army for acquisition, logistics, and technology, echoed General McConville's sentiments, saying during a Senate Armed Services Subcommittee hearing that “long-range precision fires, air-and-missile defense, and the network, all three of which we believe are foundational to anywhere the army fights but in particular, proving capabilities in those areas are vitally important for fulfilling the Army's role and potential contingency with China.”

The conflict in Ukraine has convinced the Army that during the next war it fights, it will be forced to operate in a highly-contested environment in which long-range fire will be needed to win.