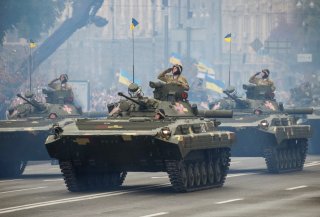 On the eve of the 2003 invasion of Iraq, the George W. Bush administration was convinced that American troops would be welcomed by the Iraqi people. Vice President Dick Cheney even explicitly said that “my belief is we will, in fact, be greeted as liberators.” Thus, the thinking was that there was no need for a major force deployment; if the invading soldiers would be viewed as liberators, there would be no significant resistance.

On the eve of the Russian invasion of Ukraine in February 2022, it looked like President Vladimir Putin believed that the Russian army would be welcomed as the “liberators” of the Ukrainians from the rule of the “Nazis” who took control of Ukraine with the help of anti-Russian Western governments. Somewhat like American thinking before the Iraq invasion, this thinking led to a relatively limited Russian invasion force.

But both the American and the Russian beliefs were based on erroneous conceptions of nationhood—even if in opposite directions. The Bush administration believed that there was an Iraqi nation—congruent to the Iraqi state—waiting to be liberated from Saddam Hussein’s dictatorship and eager to endorse the blessing of democracy brought about by American troops. Accordingly, as a massive military force was not needed to occupy Iraq, the administration turned down suggestions from the Pentagon to deploy a larger force. Putin, for his part, believed that there is no Ukrainian nation separate from the Russian people, but the nation had been taken hostage by Western forces bent on pitting Ukraine against Russia. These two mistaken beliefs affected the way both military interventions took place and brought about catastrophically bloody outcomes.

The American assumption was that since there is an Iraqi state, there must be an Iraqi nation that includes all Iraqi citizens. This was based on the American experience, according to which all the citizens in the fifty states constitute the American nation. Thus, there was supposedly no difference between the state and the nation. Indeed, American officials often referred to the “Iraqi nation” when they meant to refer to the Iraqi state. But the Iraqi nation and its supposed common national identity existed only on paper. The Coalition Provisional Authority, the U.S.-led institution that administered post-invasion Iraq, also broke down the few state institutions that functioned, even if in very brutal ways: the Baath Party, the military, and the security services.

As a result, shortly after the invasion, the “liberated” Iraqi people did not take advantage of the supposedly great opportunity awarded to them by the U.S. military to build a common democracy. They started to fight against the U.S.-led occupation, and Iraqis fought with no less intensity against each other based on rival sectarian affiliations. For their part, the non-Arab ethnic Kurds aimed to maximize their self-determination and autonomy. Thus, instead of creating the prosperous democracy that the Americans hoped for, the invasion led to a civil war in a failed state. As a result, the balance of power in the Persian Gulf broke down as the much weaker post-invasion Iraq was unable to balance and deter the more powerful Iran. Moreover, after Iraq began holding elections, neighboring Iran took advantage of its connections with Iraq’s Shia majority and became a major king-maker in Iraqi politics. The exclusionary policies of the new Shia authorities led to an armed Sunni insurgency that produced counter-attacks by Shia militias. The post-war chaos and sectarian conflict also gave rise to extremist terrorist groups, culminating with the rise of the Islamic State and its vicious brutality.

Putin also reportedly believed that his soldiers would be welcomed in Ukraine. He expected them to bring about the blessing not of democracy, but of Ukraine’s national unification with its own national brothers and sisters—the Russians. Putin concluded from his “historical study” of Ukraine's relations with Russia that Ukraine was always part of Russia and that there is no separate Ukrainian nation deserving of national self-determination. In his view, neo-Nazi collaborators took control of Ukraine with help from the West, especially the United States, but the Ukrainians—like the Russians—wished for these neo-Nazis to be removed from power. Since the Russian military was expected to help accomplish this “sacred national mission,” the Ukrainian people would welcome the Russian invaders as their liberators from the anti-Russian, Western-imposed regime in Kyiv and would gladly reunify with their Russian kin.

Otherwise, it is quite difficult to understand how the initial Russian invasion was planned and conducted. The relatively limited number of forces deployed along the border before the war led European and Ukrainian leaders to discount the possibility of an invasion because such forces were insufficient to properly support one. Putin aimed to use these forces to remove what appeared to be the only obstacle to unification with Russia—the pro-Western Ukrainian government. This was likely the goal of the Russian paratroopers who tried to land at Hostomel airport near Kyiv at the outset of the war. Their mission was to quickly decapitate the local leadership, the only thing necessary to “liberate” Ukraine. Indeed, Russian soldiers carried dress uniforms for their victory parade in Kyiv rather than extra ammunition and food rations.

As these two cases show, the absence or the presence of a common national identity is a crucial factor affecting war and peace. The absence of a common national identity may lead—especially when state institutions are extremely weak—to civil wars and foreign interventions. Under these conditions, attempts at democratization are likely to fail and may lead to large-scale violence. The Bush administration did not take these factors into consideration when embarking upon the ill-fated invasion of Iraq. The lesson is to avoid rash attempts to democratize deeply divided societies that lack well-functioning state institutions.

At the same time, the presence of a shared national identity is a powerful force that strengthens, in significant ways, popular resistance against foreign occupation, even by a far superior military force. The disparity of motivation in such cases considerably reinforces the power of the defenders even if the balance of power is working against them. The Russo-Ukrainian War demonstrates the role of a common national identity as a major force-multiplier that can compensate for a weaker military.

Finally, the Bush administration’s misconception of Iraqi national identity had major destabilizing effects on the Middle East. This instability produced a major wave of terrorism and migration from the Middle East to the West. This in turn reinforced nationalist populism in Europe and indirectly also in the United States. In the case of Ukraine, the combined effect of Putin’s misconception of Ukrainian nationalism and the heroic resistance of the unified Ukrainian nation produced a major interstate war in Europe for the first time since World War II.

Ultimately, leaders and their advisors should pay close attention to the nature of nationalism and national identity, especially in the countries at the top of their foreign policy agendas.

Benjamin Miller is Professor of International Relations and the Director of the Center for National Security at the University of Haifa. He is the author of Grand Strategy from Truman to Trump (Chicago: The University of Chicago Press, 2020); International and Regional Security (Routledge, 2017), States, Nations and the Great Powers: The Sources of Regional War and Peace (Cambridge: Cambridge University Press, 2007); and When Opponents Cooperate: Great Power Conflict and Collaboration in World Politics (Ann Arbor, MI: The University of Michigan Press, 2002; paperback, 2nd ed.)