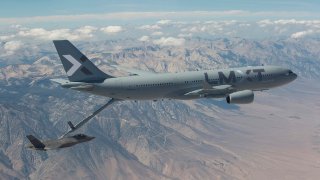 In light of the announcement that Lockheed Martin and Airbus will build the LMXT “Bridge Tanker” in Georgia and Alabama, there are some interesting questions about just how expansive the tanker’s mission scope may become.

The aircraft was designed to quickly and efficiently utilize several unprecedented tanking technologies, including the world’s first “automatic boom/air-to-air refueling system.” The LMXT, which will operate with a “fly-by-wire” boom, will provide greater range and fuel offload capacity.

At the same time, the LMXT incorporates a number of technologies and attributes that will likely greatly expand the mission scope for the aircraft. While the LMXT can primarily function as a tanker, the aircraft will also be able to use its permanently installed medevac suite to operate medevac missions. In addition, it will fly with a forklift-accessible cargo capacity capable of storing six military pallets.

Outside of these unique capabilities, the aircraft is being configured to support multi-domain networking missions. Most notably, the LMXT is being built with technical standards sufficient to support the Pentagon’s Joint All Domain Command and Control (JADC2) framework. JADC2 is a cutting edge multi-service effort to operate the force as a “meshed” network of interconnected nodes that are capable of sharing data in real time. This will enable the military to optimize targeting and attacks through fast sensor-to-shooter pairing.

These added capabilities will allow the LMXT to operate as a sensor node within an integrated, multi-domain warfare system. The aircraft could deliver weapons, cargo, and supplies while also performing time-sensitive medevac missions. Lockheed developers explain that the LMXT will have advanced cameras and rearview sensors to gather and process surveillance data while carrying out refueling missions.

All of these factors are likely informing the Air Force’s long-term plans for the aircraft. It may not merely function as a “bridge.” Instead, the multi-dimensional attributes of the LMXT might lead to it taking on a much longer service life and an expanded operational scope.

Perhaps the LMXT will outperform the emerging KC-46, a program that has struggled with numerous developmental growing pains and may not ultimately reach its anticipated combat performance. Maybe the new LMXT will fly alongside the KC-46 much longer than anticipated, something which would make sense given the global need for dispersed, long-range operations and the crucial support role that refuelers will play within those missions. Long-range enemy anti-ship missiles, for example, could lead carriers to operate much farther offshore, requiring refuelers to ensure that deck-launched fighters can reach their targets and operate with sufficient dwell time.

The vastness of the Pacific means that operations in the theater will be severely challenged without sufficient tanker support, a strategic circumstance likely to encourage the Air Force and the Pentagon to extend the service life and mission scope of its new “bridge tanker.”