Lunchtime: How Raytheon and the FAA Are Helping Drones Deliver Pizza 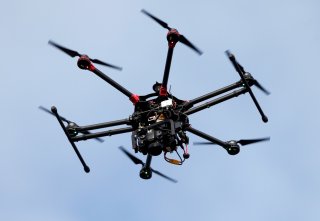 Deconflicting airspace to deliver a pizza in a civilian urban environment, however, is actually more difficult in certain key respects. It is a task the Federal Aviation Administration (FAA) and its industry partners, such as Raytheon Intelligence & Space, have vigorously embarked upon with urgency, given the extent to which drones are proliferating around the globe.

Raytheon and the FAA have been involved in an effort to identify and engineer new technical standards and computer applications to enable beyond visual-line-of-sight, deconflicted drone flight in a civilian environment.

“At Raytheon Intelligence & Space, we provide safety critical Air Traffic Control systems that are used at every airport in the country today. If we can show that we are using the same technologies that are being used to control $100 million aircraft flying hundreds of people through the skies today, then there is hope they can draw a corollary between that and the safety case for drones flying over your neighborhood,” said Kip Spurio, technology director of Air Traffic Systems at Raytheon Intelligence & Space, told The National Interest in an interview.

The goal is not only to enable multiple small drones to operate without conflict in close proximity in uneven terrain or urban environments but also to facilitate breakthrough levels of “beyond visual-line-of-sight” operations.

“If you have a long extended, say two or three- or maybe a 10-mile long route, the rule says you have to have a spotter every so far along the route. The drone must be under constant visual observation to ensure that nothing bad happens. Currently, the rules are, if you're operating the drone, as the pilot, you (or someone working with you)  have to be able to see the aircraft at all times to make sure it doesn’t run into something or someone,” Spurio explained.

Spurio, who served for years as an aircraft control officer and battle management officer in the U.S. Air Force, understands the procedures necessary to deconflict in a warzone.

“Now there's plenty of opportunities to take the type of technologies that we're developing here for civil application and use them in the war zone.” Spurio said.