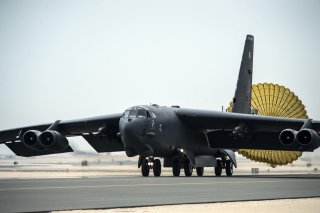 In their quest to field hypersonic weapons, the U.S. military is testing the potential for new, innovative weapons.

"What you accomplished marked the fastest recovery of a monorail sled in over 30 years, and the first time we have recovered a planned reusable sled at those speeds ever,” Lt. Col. Paul Dolce, commander of the 846th Test Squadron, said in the Air Force statement.

“Truly historic in my books! This could not have been done without everyone here who works at the track.

“These efforts will now set up our future HyTIP [Hypersonic Test and Evaluation Investment Portfolio] runs for success and add a new capability for our hypersonic customers."

Daniel Lopez, a project manager for the HHSTT, also wished the team future success. “I echo what Lt. Col. Dolce said,” Lopez said. “Excellent job to the entire team for their hard work and innovation. This just sets the bar that much higher.”

The U.S. Air Force, as well as the U.S. military writ large, has placed an emphasis on hypersonic weapons, increasing the testing tempo in recent years. The United States' two most significant strategic rivals, Russia and China, have also undertaken hypersonic weapon testing, underscoring the importance of Mach 5-plus technology.

“The 846 TS has been responding to a significant increase in demand for hypersonic weapons testing, with a focus on improving its high-speed breaking capability in order to recover sleds for post-test analysis,” the 846th Testing Squadron explained. It added that “HHSTT is the only sled track capable of recovering sleds with test articles from velocities over Mach 5.”

“The track serves as a critical link between laboratory-type investigations and full-scale flight tests by simulating selected portions of the flight environment under accurately programmed and instrumented conditions.”

Testing recoverable and reusable test sleds allow the Air Force to collect data from hypersonic speed events without expending costly and complex hypersonic missiles. In addition, the testing evaluates some of the complex technology that goes into hypersonic weapons, like superheated resistant materials and other components specific to hypersonic weapons.

The Air Force recently had a successful AGM-183A Air-launched Rapid Response Weapon (ARRW) test. The test followed a string of embarrassing failures for the ARRW program, though the recent test, combined with the Air Force’s sled testing, points to future successes.