Maduro Visits Turkey After Snub by the Organization of American States 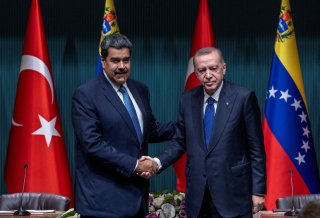 Venezuelan president Nicolas Maduro visited Turkey on Wednesday on the first leg of his Eurasian tour—a trip the Venezuelan leader took at the same time as the “Summit of the Americas,” from which he was pointedly excluded by the U.S.-led Organization of American States (OAS).

Maduro was present in Ankara, Turkey’s capital, at the same time as Russian foreign minister Sergey Lavrov, who arrived on Wednesday following the cancellation of a trip to Serbia after its NATO neighbors refused to allow his plane to cross their airspace. On Wednesday, shortly before Maduro’s meeting with Turkish leader Recep Tayyip Erdogan, the Russian foreign minister met with his counterpart, Turkish foreign minister Mevlut Cavusoglu. It was not immediately clear whether Maduro and Lavrov also met.

Turkey, which has largely refused to participate in U.S. and European Union sanctions on Venezuela, has expanded its trade ties with the oil-rich South American country in recent years. Bilateral trade between Ankara and Caracas rose to $850 million in 2021, according to the Turkish president’s office. Turkey has also emerged as a major purchaser of Venezuelan gold, although this trade has been controversial due to human-rights issues over the gold’s extraction in Venezuela and concerns that some of it passes through Turkey to neighboring Iran in violation of U.S. sanctions.

At a joint news conference with Maduro, Erdogan emphasized Turkish friendship with Venezuela and criticized the “one-sided” sanctions on Venezuela, imposed after repeated government crackdowns on pro-democracy protests from 2014 onward.

“We will always stand with the friendly and brotherly people of Venezuela,” the Turkish leader added, claiming that he intended to make a reciprocal visit to Caracas in July. Such a trip would be Erdogan’s second trip to Venezuela, following an earlier visit in 2018.

In an attempt to strengthen Venezuelan-Turkish ties, Maduro has visited Turkey several times since he assumed his country’s presidency in 2013. One of these visits engendered controversy after the Venezuelan leader was filmed eating at “Salt Bae,” an expensive Turkish restaurant, during a period of significant food shortages at home.

The Summit of the Americas, organized by the OAS, took place in Los Angeles from June 7 until June 10. Although intended to promote inter-American unity, the conference notably excluded the governments of Venezuela, Cuba, and Nicaragua over human rights issues.