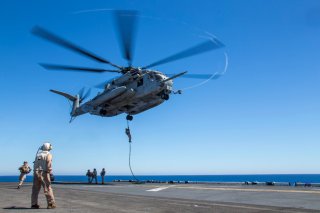 The emerging “K” model of the CH-53 is engineered to provide more lift, speed, performance, and protection compared to prior models.

During a 2023 budget hearing at the Senate Appropriations Subcommittee on Defense, Marine Corps leaders and members of Congress discussed the new platform’s progress. Gen. David H. Berger, the Marine Corps’ thirty-eighth commandant, explained that the new CH-53K helicopter lifted a 14,000 pound H-60 helicopter at 12,000 feet, demonstrating an unprecedented ability to perform high-risk, heavy lift missions. Berger stressed that there is nothing in the Marine Corps’ current inventory with a comparable capability.

“We have to make sure it's affordable,” Berger told lawmakers, explaining that foreign military sales of the helicopter and increased production will lower the cost per unit of the aircraft and improve the prospects for long-term sustainment.

The idea with the helicopter has been to engineer a new aircraft with much greater performance and three-times the lift capacity compared to the existing CH-53E, or “Echo,” model aircraft designed in the 1980’s, Navy weapons developers told the National Interest several years ago when the new K model was first being developed.

Earlier in the development of the CH-53K, Marine Corps program managers said the requirement for the new helicopters is to be able to lift 27,000 pounds, take the load 110 nautical miles, stay thirty minutes on station and then be able to return to a ship under high-hot conditions. This lift capacity is three times more than the 9,000-pound lift ability of the existing Echo model. The initial requirement for the K model CH-53 emerged out of the need to build a variant with much more lift.

Engineers with the K program from Sikorsky told the National Interest that engineers were using a handful of new technologies to achieve greater lift, speed, and performance with the helicopter. This includes the integration of a new, more powerful GE T408 turboshaft engine for the aircraft, developers explained.

The helicopter is also built with lighter-weight composite materials for the airframe and the rotor blades that can equal or exceed the performance of traditional metals at a much lighter weight, Sikorsky and Navy developers explained.

Earlier in the CH-53K’s development, Sikorsky weapons developers said the design involves an all-composite skinned airframe, fourth-generation rotor blades, and a combination of new airfolds, taper, integrated cuff, and a modified tip deflection of the blade. The helicopter will also be configured with infrared countermeasures, a high-tech laser-jammer designed to throw incoming missiles off course.

In addition, the CH-53K uses what developers refer to as a split-torque transmission design, which transfers high-power, high-speed engine output to lower-speed, high-torque rotor drive in a weight efficient manner.

The K model is fly-by-wire-capable and uses the latest in what’s called conditioned-based maintenance, a method wherein diagnostic sensors are put in place to monitor systems on the aircraft in order to better predict and avert points of mechanical failure.

Heavier lift helicopters bring new tactical dimensions to both expeditionary and maritime warfare, as they enable more dispersed operations. Forward-operating and otherwise disconnected force concentrations can be resupplied with supplies, weapons, and ammunition by heavier helicopter transportation loads, changing the tactical equation. A combat outpost in an island area in the Pacific can more easily receive reinforcements from amphibiously launched heavy-lift helicopters. A CH-53K would also be better positioned to, for instance, sling load mobile artillery weapons or even light tactical vehicles into high-risk land combat areas as well.