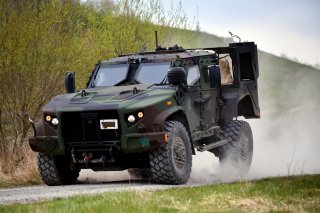 The United States Marine Corps’ latest innovation is neither ship, nor rifle, nor armored vehicle. Instead, this summer, the U.S. Marine Corps is taking service of a trailer for their fleet of joint light tactical vehicles (JLTVs), the Humvee replacement vehicle.

“The new trailer provides significantly increased payload,” said Maj. Elena Vallely, team lead for JLTV Systems, which is part of the Logistics Combat Element Systems portfolio at MCSC. “There will be improved trafficability, improved durability, and improved payload that provides an increased capability in line with light fleet modernization of the Joint Light Tactical Vehicle fleet.”

The trailer is not your average truck trailer. Instead, it “comes with features allowing Marines greater flexibility to transport equipment with ease across long distances and difficult terrain.” These features are particularly relevant to the “conditions which need to be considered in vast, austere settings such as Littoral Operations in Contested Environments and other concepts outlined in the Commandant’s Planning Guidance and Force Design 2030 initiatives.”

In the future, all JLTV trucks and their trailers will roll off factory lines painted dark green instead of the tan color optimized for operations in arid climates in the Middle East.

“The new trucks and the new trailers we’ll be procuring and fielding will be green,” a U.S. Marine Corps spokeswoman said. “Over the course of the next year we’ll be seeing a transition of the vehicle fleet to a green truck with green trailer configuration.”

As part of the U.S. Marine Corps’ Force Design 2030, spearheaded by Commandant of the Marine Corps, Gen. David Berger, the Marine Corps is shifting gears from the grinding land campaigns that defined operations in the Middle East toward the distributed maritime environment of the Indo-Pacific region. This trailer fits well within that force design as a robust, long-range payload carrier.

“Maintainability and sustainability are critical factors in EABO. The trailer uses the same type of tires as JLTVs, making it easier for Marines to source and replace trailer tires when needed,” the U.S. Marine Corps statement announcing the JLTV trailer acquisition explained.

It added that “this built-in sustainability feature leverages the organic supply system used across the JLTV family of vehicle operations. Additionally, the forward-area of the trailer is outfitted with a 12-volt electrical connection point, making the trailer compatible with North Atlantic Treaty Organization allies in future operations.”

“Fielding priorities continue to mature between Combat Development & Integration along with other stakeholders,” another U.S. Marine Corps spokesperson explained. “We will consider the fielding timelines of the JLTV vehicle when fielding the trailer in order to ensure proper employment of the trailer capability both with the JLTV vehicle and other integrated programs in the fleet.”

The U.S. Marine Corps anticipated fielding a total of 4,000 JLTV trailers to all three of the Corps’ active-duty U.S. Marine infantry divisions and its Marine Expeditionary Units.