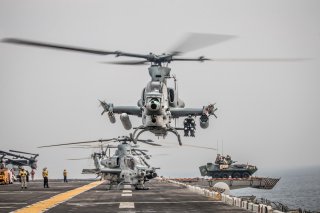 With China being the United States’ pacing threat, the Marine Corps is gearing up for a war in the maritime domain.

“Marines at the TACC demonstrated flexibility and versatility through simultaneous focus on real world and simulated operations,” the statement added. And “while battle tracking personnel and aircraft in support of the exercise, 3rd MAW staff also conducted planning based on an Indo-Pacific maritime conflict scenario.”

China is currently the Marine Corps’ pacing challenge and a threat that has prompted some of the most significant changes in the Corps in over a generation.

While the Marine Corps acted as a kind of second Army, fighting long protracted battles during the United States' involvement in Iraq and Afghanistan, the Corps is now returning to its maritime heritage.

Under the Marine Corps Commandant’s direction, the Corps has divested all its tank battalions, and much of its tube mortars and artillery. It has also renamed several battalions to highlight their littoral nature.

“At the various nodes, MAG-39 conducted operations such as air-delivered ground refueling, forward arming and refueling, and close air support,” the Marine Corps explained. “The exercise culminated in an air assault with participation from MV-22B Ospreys, CH-53E Super Stallions, AH-1Z Vipers and UH-1Y Venoms in support of a company of infantry Marines from 2nd Battalion, 1st Marine Regiment.”

The Indo-Pacific region is the U.S. military’s largest combat command, stretching from the American west coast and Hawaii to the Indian ocean. Given the long distances involved in the region, establishing refueling depots and a robust aerial refueling capability will be a top priority for the Marine Corps—and one that is certainly worth perfecting.

“Ultimately, this exercise proved the Wing's readiness to support I Marine Expeditionary Force from competition to conflict. Any clime, any time!”