The Marines Are Modernizing Amphibious Landings With Chinese Missiles In Mind 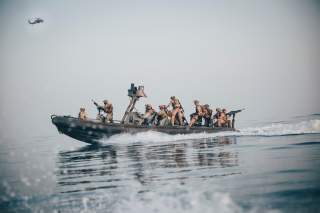 Key point: Cheaper ships that allow the Navy to disperse its forces will be more effective against Chines missiles.

It’s no secret that the U.S. Navy and U.S. Marine Corps want to buy smaller, cheaper amphibious ships for landing troops and equipment on enemy shores.

The new, small amphibs would complement the Navy’s existing force of around three-dozen large vessels, helping the fleet to spread out over a wider area in order to avoid Chinese anti-ship missiles.

Now the U.S. fleet is narrowing down exactly what kind of ship it might buy. Where before the maritime services eyed a design similar to the oil industry’s Offshore Support Vessel, now they’re looking at a unique Australian design that combines the qualities of a landing craft and a seagoing vessel.

Australian company Sea Transport’s Stern Landing Vessel boasts the sharp bow of a highly seaworth ship with a ramp on its stern. The ship’s shallow draft would allow it to back itself onto a beach for rapid loading and unloading.

The Stern Landing Vessel is “similar to conventional landing craft,” Sea Transport explains on its website. “[H]owever, the SLV design has overcome the primary problems associated with conventional landing craft, including: poor head sea capability due to bluff bow ramp, dramatically reducing speed; poor visibility due to bow ramp; crew discomfort and fatigue due to location of accommodation directly above machinery spaces; inadequate power available when de-beaching due to propellers working inefficiently astern, and the need to overcome the forefoot suction effect.”

In short, the Stern Landing Vessel is more stable, more efficient and more comfortable than a landing craft is, while still being able to beach itself.

Sea Transport emphasizes its ability efficiently to build stern-landers at a wide variety of shipyards. “Designed to commercial or naval rules, SLVs can be built by any ship-yard able to construct commercial vessels to class-rule standards,” the company states.

Money is an inescapable problem as the Navy and Marine Corps embark on potential major changes to the U.S. amphibious force.

The Navy and Marine Corps as recently as 2016 announced it needed 38 large amphibious ships. But in early 2020 the fleet operates just 32 amphibs, including nine big-deck assault ships.

The amphibious fleet also includes 11 landing platform ships, or LPDs, that can carry people and landing craft plus 12 landing dock ships, or LSDs, that mostly carry cargo. The Navy’s current goal is to boost the amphib fleet to 12 big-deck assault ships and 13 each LPDs and LSDs.

The Navy and Marines both are preparing alternative force-structure assessments that, when they arrive some time in 2020, appear likely to call for cheaper vessels such as Sea Transport’s stern-lander.

Capt. Brian Metcalf, the San Antonio-class program manager, asked the audience at the same 2019 industry event to imagine a different construct than the three-ship amphibious ready group, or ARG, that currently dominates Navy and Marine force-planning. An ARG typically includes one big-deck assault ship, one LPD and one LSD in order to land and support a Marine battalion.

“We have defined, unfortunately, the ARG as a combination of one each of those three ships for entirely too long,” Metcalf said.

The Navy, in theory, could form small amphibious groups around single LPDs, each capable of landing a few companies of Marines. Round out the group with inexpensive Stern Landing Vessel and escorts, and the fleet might discover a useful capability that’s cheaper than the current ARG and helps it to spread out its forces to better avoid Chinese missiles.

The Navy’s budget proposal for 2021 asks Congress for $30 million to begin developing the “next-generation medium amphibious ship design.” The stern-lander appears to be the leading candidate.