The Marines Are Retooling Their Missiles for Great Power War 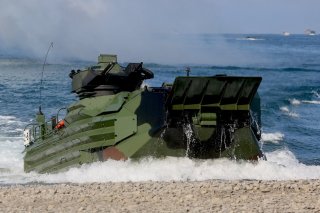 To become a more lethal maritime force, the U.S. Marine Corps is testing alternatives to legacy guidance systems for TOW anti-tank missiles, ensuring they will retain their accuracy even at sea.

"In order to enhance the Marine Corps' capability to control littoral areas with a reduced footprint, 2nd LAR conducted a test of a radio frequency missile fired from a TOW missile system on Camp Lejeune, North Carolina, Sept. 19, 2022," a Marine Corps statement explained.

The TOW missile, though a product of the Cold War, remains a potent anti-vehicle munition. The missile's original configuration is wire-guided, necessitating a connection between the missile and launcher at all times.

"The purpose of this live-fire exercise was to validate that a radio frequency missile can be employed against threats on or coming from the water surface," said Chief Warrant Officer Three Jon Osborn.

"The radio frequency missile does not utilize a wire to communicate with the gunner, it uses a radio frequency signal between the missile and launch tube," explained  Chief Warrant Officer Three Jon Osborn, the battalion gunner for second LAR.

"When utilized properly, radio frequencies give the unit more control of the missile's trajectory by eliminating factors dictated by their surroundings," Osborn added.

"Once a TOW missile is launched the copper wires unspool from the missile and sag," explained Sgt. Courtland Mabe in the Marine Corps statement. "They can get caught on debris like trees or bushes. The wires, while shooting over water, can become submerged and cause the missile to be erratic."

As a part of the Marine Corps' transition from long, grinding land campaigns in the Middle East to facing the Chinese threat in the Pacific, the Corps is getting reacquainted with its maritime heritage.

As a part of that shift to the littoral area, the Marine Corps is divesting from equipment that would not thrive in a maritime environment. In addition to divesting all tank battalions, the Corps has also gotten rid of much of its tube mortars and artillery.

In addition to investing in new ship-to-shore vehicles, like the Amphibious Combat Vehicle, the Corps is also making sure its TOW missiles—which could be mounted to the ACV—can succeed at sea.

Anti-vehicle missiles like the TOW have proven their worth against armored vehicles in Ukraine, perhaps the Corps' motivation for revamping their stocks.