Marines Corps ARV to Be Armed With New Laser Weapons 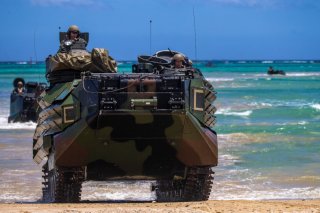 The U.S. Marine Corps Advanced Reconnaissance Vehicle (ARV), a new platform in prototype form waiting for additional service testing and evaluations, will likely include a range of laser weapons systems.

The ARV program, which could enter production sometime next year, is a key part of the U.S. Marine Corps strategy for future amphibious warfare, particularly in the Pacific theater. The service is now evaluating two industry prototype offerings, and vehicles from both Textron and General Dynamics Land Systems (GDLS) will soon be delivered to the service.

While there is some chance the new reconnaissance mission might be fulfilled by a modified version of the Amphibious Combat Vehicle (ACV), a new ship-to-shore attack platform, the U.S. Marine Corps has remained committed to developing a lighter expeditionary ARV to perform scout, surveillance, and reconnaissance missions. As a deployable light-weight vehicle, as many as four ARVs could fit on a Landing Craft Air Cushion or Ship-to-Shore connector.

At the moment, there is no formal U.S. Marine Corps requirement for lasers on the ARV. However, industry builders such as GDLS are planning for the possibility that the service might want to add lasers to the vehicle. GDLS engineers have designed special accommodations for the vehicle to operate with enough power to support weapons such as lasers.

“We are anticipating in the future that the power demands for things like directed energy will be part of the Marine Corps future,” Phil Skuta, the director of strategy and business development US Marine Corps and Navy, General Dynamics Land Systems, told The National Interest in an interview.

High-tech weapons and rapid modernization for systems such as lasers are a point of emphasis in the U.S. Marine Corps Force Design 2030 document which anticipates multi-domain maritime warfare circumstances requiring advanced precision weaponry. Modern weapons, for example, will need to operate in what the U.S. Marine Corps calls a “stand in” capacity able to operate inside of an enemy’s engagement zone.

The Force Design document intends to prepare U.S. Marine Corps platforms for future weapons, advanced tactics, and warfare scenarios, so it makes sense that GDLS and Pentagon developers would be considering lasers. Force Design 2030 does stress the importance of operating effectively within what it refers to as a “Weapons Engagement Zone.”

“Forces that can continue to operate inside an adversary’s long-range precision fire weapons engagement zone (WEZ) are more operationally relevant than forces which must rapidly maneuver to positions outside the WEZ in order to remain survivable,” Marine Corps Commandant Gen. David Berger wrote in the Marine Corps Force Design 2030 Document.