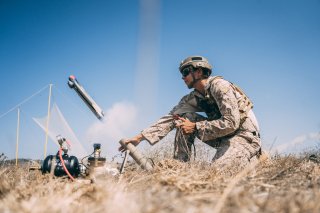 A Chinese newspaper released a photograph of the People’s Liberation Army’s emerging suicide drone descending upon and destroying a tank, revealing China’s transparent effort to develop the tactical advantages offered by similar drones.

The Chinese-government-backed Global Times newspaper describes China’s new FH-901 suicide drone as its “answer” to the U.S. Switchblade drone. The Switchblade can perform high-risk reconnaissance missions and, perhaps of greatest consequence, function as an explosive and descend upon and take out enemy armor. Many Switchblades have been delivered to Ukrainian forces, who are now having success destroying Russian tanks and vehicles from the air.

The FH-901 suicide drone and China’s emerging CH-10, CH-4, and CH-5 drones were all recently put on display in a video produced by China’s Aerospace and Technology Corp. The FH-901 can launch from both air and ground platforms, the Global Times said, suggesting that it could essentially be fired out of a manned helicopter or fighter jet. Aerial attacks could prove quite impactful against tanks and armored vehicles, given that they are more vulnerable when attacked from above by top-down attacks.

The United States has demonstrated the ability to air-launch mini-drone explosives from fighter jets, helicopters, and cargo aircraft for years, and the rapid maturation of the technology is quickly leading to the development of “recoverable” air-launched drones. The Defense Advanced Research Projects Agency’s (DARPA) Gremlins program, for example, has had success in launching and recovering drones from a C-130 cargo plane, and U.S. Air Force F-16s have for several years been able to launch mini Perdix reconnaissance drones from their flare chaff.

The tactical advantages associated with suicide drones are quite significant, as they can blanket an area with intelligence, surveillance, and reconnaissance, test or overwhelm enemy air defenses, or simply become an extremely lethal on-the-spot weapon to use without putting humans or manned aircraft in danger.

The Global Times does not say whether its suicide drone has any measure of autonomy, which would be a major advancement. The U.S. Air Force has been developing such technology for many years and is also showing how it can be integrated into platforms through manned-unmanned teaming and artificial intelligence-enabled algorithms and data processing.