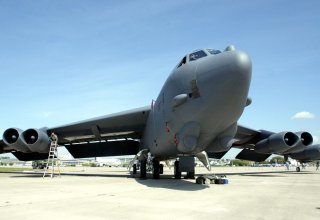 The U.S. Air Force might deploy a new generation of air-launched, nuclear-armed cruise missiles earlier than planned due to successful design work, prototyping and conceptual development for the weapon.

By choosing Raytheon’s design as a “sole source contractor,” the Air Force Nuclear Weapons Center expressed confidence that the weapon will arrive “on-schedule,” according to a report in Air Force Magazine.

Early plans called for delivery of the Long-Range Stand-Off (LRSO) Weapon by 2030. However, given that the program is progressing very well ahead of schedule for its next milestone in 2022, its arrival could easily be earlier.

There is always the chance major global powers could become immersed in a high-stakes, dangerous escalation of tension, raising the possibility of a nuclear confrontation. The hope is that the existence of a new long-range nuclear-armed cruise missile would provide that unique additional variable necessary to keep the peace.

Such is the Air Force thinking when it comes to the current developmental trajectory for LRSO. The weapon will provide commanders with a wider range of options, as a bomber-launched nuclear cruise missile brings the prospect of deterring nuclear attack without needing to have a stealth bomber actually penetrate enemy airspace.

Naturally, this lowers risks and also increases the deterrence posture by virtue of letting a potential adversary know there are a wide range of methods through which a response to an attack might be possible. Interestingly, the existence of nuclear weapons, according to Goldfein and other U.S. Air Force senior leaders, is entirely based upon the notion of deterrence. That means bringing the prospect of massive destructive power to achieve the opposite effect by stopping nuclear war before it happens.

In the event of a major nuclear attack on the United States, a stand-off air-launched nuclear cruise missile may be among the few weapons able to retaliate. As a result, these new weapons would function as an essential deterrent against a first-strike nuclear attack. The idea with deterrence is not so much to use nuclear weapons under threatening circumstances, but rather to provide commanders and decision-makers with a range of options with which to prevent escalation.

Senior Air Force leaders continue to argue that engineering new, modern LRSO weapons with nuclear capability may be one of a very few assets, weapons or platforms able to penetrate emerging high-tech air defenses, depending upon the warfare scenario. Such an ability is, as a result, deemed crucial to nuclear deterrence and its principle aim of preventing major-power warfare.

At the same time, some experts are raising concerns as to whether a nuclear-armed cruise missile could blur crucial distinctions between conventional and nuclear attacks and actually therefore potentially increase risk and lower the threshold to nuclear warfare.

The LRSO will be developed to replace the aging AGM-86B Air-Launched Cruise Missile or ALCM, currently able to fire from a B-52. The AGM-86B has far exceeded its intended life-span, having emerged in the early 1980s with a ten-year design life, Air Force statements said.

Unlike the aging ALCM which fires from the B-52, the LRSO will be configured to fire from B-21 bombers as well, service officials said; both the ALCM and LRSO are designed to fire both conventional and nuclear weapons.