Meet the U.S. Navy's Newest Fast Transport (It Can Haul a Small Fleet of Tanks) 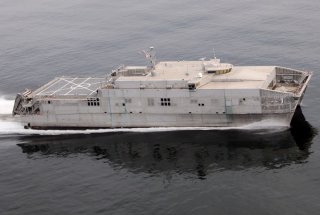 The U.S. Navy will soon deploy another super high-speed vessel able to transport 600 tons of troops, weapons, equipment, ammo and even a small fleet of seventy-ton Abrams tanks to war. This transport will change the scope and nature of coordinated amphibious attack.

While classified as “non-combatant” ships, the EPF ships are not themselves armed with weapons but engineered for fast humanitarian transport, disaster relief and other high-speed missions. However, make no mistake, the ships are planned for major combat operations as well, as they can “roll-on/roll-off” armored vehicles, large numbers of armed soldiers or marines and, if needed, a group of drones.

For instance, an ability to transport a group of Abrams tanks brings a huge advantage to Army, Navy and Marine Corps forces, because deploying and preparing heavily armored vehicles for land assault is extremely difficult.

The Army, in particular, is taking major steps toward becoming more expeditionary and faster to deploy. Abrams tanks, specifically, add to these challenges. They are very heavy, not air-transportable and difficult to mobilize.

Accordingly, an ability to fast-track five or more main battle tanks to combat delivers unprecedented deployment capability. With this kind of high-speed transport, it is not too much of a stretch to consider that Abrams tanks and other large combat vehicles could much more easily support amphibious attacks from ship-to-shore.

While Marine Corps amphibious assault ships are built to swim as well as fight ashore, an ability to supplement, fortify or strengthen land attack from the ocean dramatically changes the tactical equations for commanders who might otherwise need weeks to prepare for a heavily-armored land invasion.

Existing Navy Ship-to-Shore connectors can transport Abrams tanks, yet one at a time. Having EPFs makes things faster. A heavy armored attack from the sea, enabled by EPFs, would also help secure the beachhead for large amounts of follow-on attack forces.

Such a prospect gives new meaning to multi-domain warfare possibilities as there will soon be twelve operational EPFs. As one Navy report said, “The USNS Newport is on track to deliver later this year. Austal USA has also started construction of the future USNS Apalachicola (EPF 13) and is under contract to build the future USNS Cody (EPF 14).”