With Merkel's Exodus, Germany is Losing a Key Interlocutor with Russia 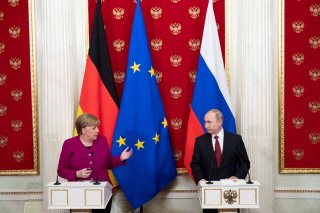 Germany’s federal elections in September 2021 will mark the end of Angela Merkel’s sixteen years as chancellor. While she leaves behind a mixed legacy on Russia policy, Germany and Europe are losing a leader who understands Russia and Vladimir Putin all too well.

Amidst these destabilizing actions, Chancellor Merkel has been a strong proponent of maintaining pressure on Russia through the continued use of coordinated sanctions. Germany has also worked through the Minsk Process to advance progress on the situation in Ukraine, despite limited success to date.

However, Merkel’s Russia policy has also been strongly criticized in Washington, Kiev and other European capitals. Her staunch support of the Nord Stream II pipeline, which will transfer gas directly from Russia to Germany through the Baltic Sea, bypassing Ukraine and depriving the country of billions of dollars in transit fees, has drawn scrutiny. Unlike the Biden administration, which views the pipeline as a geopolitical project that will increase Russia’s influence and leverage over Europe and Ukraine, Merkel continues to view the project as a solely commercial endeavor. Because of the German government’s decision to complete the pipeline, the next chancellor will bear even more responsibility for Ukraine’s future.

Despite this mixed track record, Merkel understands Putin and his intentions. She knows Russia and is fluent in the Russian language. Merkel believes that difficult problems must be solved through dialogue, and she has met Putin several times over the course of their long tenures in office. Thus, Germany will lose an important interlocutor when Merkel steps down.

Heading into the September elections, Germany’s main political parties have presented differing policies on Russia. The German Green Party and its candidate for chancellor, Annalena Baerbock, are the toughest on Russia. Baerbock has vowed to block the Nord Stream II pipeline and stand up to authoritarian powers including Russia and China. It is a stance that resonates well in Washington. Should the candidate representing the Christian Democratic Union of Germany, Armin Laschet, prevail as the leader of the next coalition government, then Germany’s approach toward Russia will likely be defined by economic interests rather than political or geopolitical concerns. The French presidential election in 2022 will also determine what kind of partner Germany has in advancing its interests in Europe and vis-à-vis Russia.

Torrey Taussig is a Doctoral Candidate and H. B. Earhart Fellow at the Fletcher School of Law and Diplomacy at Tufts University.