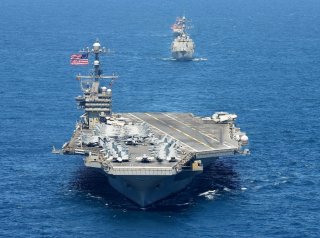 The USS George Washington, a Nimitz-class aircraft carrier launched in 1990, is in port for a mid-life refueling. The work, which would replace the nuclear fuel that powers the carrier’s reactors, has been delayed by more than a year.

The delay is due to additional repair and refitting issues that the Navy discovered while the carrier was in port. The ongoing COVID-19 pandemic then exacerbated the situation.

The spokesman elaborated further, explaining that “COVID-19 has also contributed to the delay, both directly (e.g. teams quarantined after a positive case) and indirectly (e.g. vendors’ supply chain delays).” But he also explained that “the Navy has increased government oversight at the shipyard to preserve and mitigate further schedule delays.”

While the Nimitz-class nuclear-powered aircraft carrier is expected to serve for half a century, it requires a mid-life refueling to exchange spent reactor fuel rods. The process can take several years, though the USS George Washington’s refueling has taken an exorbitantly long time.

A Newport News Shipbuilding spokesman also explained that the yard “increased resources and extended the use of overtime” to compensate for delays caused by the pandemic.

“Additional schedule reduction initiatives include the establishment of an operational command center that enables work teams to focus on expediting repair cycles,” he added.

“The unplanned growth was largely from emergent discovery as work teams inspected systems and equipment throughout the ship that cannot be inspected prior to the maintenance period. As we near completion, emergent discovery work has decreased, and we look forward to outfitting and final testing so we can redeliver a fully recapitalized carrier to the fleet,” the spokesperson explained.

The carrier initially came to port in 2017, and in 2019, it reached the halfway marker for reactor work on time. However, a Huntington Ingalls press release from 2020 listed a completion date of 2022, indicating that the job would take longer than expected.

Despite the difficulties experienced with refueling and refitting the USS George Washington, Newport News Shipbuilding, the yard overseeing the work, has multiple major shipbuilding projects on its hands.