Is the Minuteman III ICBM on Its Last Legs? 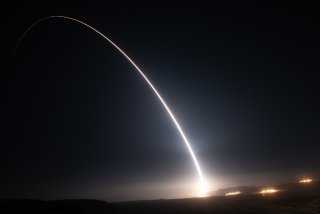 An unarmed Minuteman III ICBM carrying three re-entry vehicles traveled 4,200 miles during the test demonstration flight. Despite the missile being decades old, it demonstrated that the United States does readily maintain and can operate a ground-launched nuclear weapon.

Although U.S. defense officials emphasize that the Minuteman III is able to fulfill its mission, the system is anticipated to have “increasing difficulty penetrating future adversary defenses,” the RAND report said.

It would make sense that additional targeting technology would be needed given advancements made by great power rivals. China, for instance, is known to operate road-mobile ICBM launchers with multiple re-entry vehicles able to pinpoint multiple targets from a single missile. This enables rapid targeting transitions and repositioning prior to launch if needed.

“Senior military officials have made clear that a comprehensive overhaul of the  U.S.  ICBM force is needed to increase targeting flexibility; to mitigate improvements in adversary missile defenses; and to strengthen defenses against cyberattacks that could undermine the system’s responsiveness and degrade communication in a crisis,” the RAND study explained.

China is now also building ground-based ICBM silos to fortify its nuclear arsenal with fixed launch sites. “The number and types of targets that U.S. nuclear forces might need to hold at risk to deter an adversary's use of nuclear weapons in a crisis or conflict are changing—and can be expected to continue to change in complex and unpredictable ways over the next several decades,” the report said.

The RAND study noted that newer targeting technology is also needed because adversaries are increasingly developing advanced missile defenses and countermeasures designed to intercept or defend against incoming ICBMs. To establish a credible deterrent and succeed in holding Chinese ICBM silos at risk, developing advanced guidance technology and flight trajectory enhancements is essential.

“That thing is so old that in some cases the drawings don’t exist anymore,” Adm. Charles Richard, commander of U.S. Strategic Command, told a January 2021 virtual conference audience according to the RAND report. Admiral Richard then stated that “Let me be very clear: You cannot life extend the Minuteman [III].”

While the RAND report said that the exact nature of the technological enhancements to the ground-based strategic deterrent (GBSD) have not been described publicly, the report detailed a number of key performance parameters and enabling technologies that are being integrated into the GBSD.

Through a digital engineering process where computer simulations are able to replicate key weapons performance parameters and make technological assessments, the GBSD is being engineered to bring new levels of reliability, targeting, and guidance technologies to sustain the U.S. ICBM arsenal into the 2070s. Software upgrades, for instance, can add new guidance systems, reliability technologies, and targeting sensors to the weapon as new innovations emerge, an important factor given that the new ICBM is slated to operate against a new generation of enemy threats and countermeasures.

The possibility for ongoing modernization was intentionally built into early designs of the weapon thanks to digital engineering techniques able to replicate technological detail and help establish common computer standards for continued upgrades.

Air Force Lt. Gen. Jack Weinstein, deputy chief of staff for Strategic Deterrence and Nuclear Integration, told The National Interest in a previous interview that the emerging GBSD was being engineered for increased reliability, flight trajectory, and targeting.

Weinstein explained the rationale behind the Pentagon’s concept of deterrence and the need to maintain a strong nuclear arsenal. Weinstein cited the work of a famous World War II-era philosopher named Bernard Brodie. Brodie, a professor at Yale, envisioned the paradox central to nuclear deterrence.

The premise of Brodie’s 1946 essay, “Implications for Military Policy,” was that the promise of total and catastrophic destruction prevented war. Throughout human history, weapons have always been created to destroy or disable an enemy, and the intent has always been to use them in conflict. Nuclear weapons, however, are entirely different since they are intended to deter an adversary from seeking a military confrontation and will hopefully never be used.