A Modest Proposal? Defunding or Disbanding the U.S. Military as Responses to National Failure 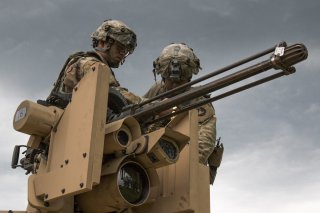 In the midst of these profound social challenges afflicting the United States today, our national security establishment is stubbornly focused on “great-power competition,” which is a short-hand for conventional, high-end kinetic conflict between militaries. The unclassified summary of the 2018 National Security Strategy, remarkably, makes no mention of climate change, and even the Obama Administration’s 2014 Quadrennial Defense Review devoted only a few paragraphs to the subject. The services themselves make no secret of their priorities, focusing on the acquisition of high-end aircraft, ships, and hypersonic missiles they cannot afford despite record budgets, as well as a wholescale nuclear modernization.

Our future is probably both more mundane and frightening than the “battlespaces” imagined by military planners, in which the playing field we have taken for granted rises up and casts the pieces we play with about. Getting the national-security establishment to acknowledge this reality may depend upon embracing policies once considered heretical: defunding or even disbanding the U.S. military as it currently exists.

Why advocate such extreme options, particularly when modest alternatives exist? The comparison with policing is instructive. Defunding and disbanding the police are two policy responses to the fact that policing takes up too much of the budget of U.S. municipalities, just as defense spending makes up the bulk of U.S. discretionary spending. As economist and New York Times columnist Paul Krugman once observed, the United States is an insurance company with a military. Defense differs from policing in this instance for the simple reason that whereas policing is local, the military is a national institution and not directly playing a significant role in the current national crises.

The very fact that civilians, especially the elderly and minorities, are paying the coronavirus pandemic’s blood tax should make us wonder about how our current conception of national security, focused upon external, conventional threats, is out of sync with the world as it is. But there is a bright spot amidst the darkness. Affecting major changes to a nation’s military generally takes place only after a catastrophic military defeat or political revolution. The current coronavirus pandemic offers us an opportunity for change without either, albeit with much civilian death.

At least three times since the end of World War II, Secretaries of Defense proposed serious reforms to cope with major new geopolitical and technical challenges. Each time, their plans met with bitter military opposition and were waylaid by unrelated military setbacks.

Such examples suggest that reformers have had particularly bad luck in changing the U.S. military, not simply because of exogenous events, but because the forces arrayed against them were far more formidable than ostensibly laudable ideas such as fiscal prudence, civilian control, and social or technological adaptation. However, the pandemic is neither a person nor a political institution (such as the services); instead, it is another example of genuine Clausewitzian chance that opens up a profound opportunity for change that might make the nation better suited to coping with future challenges.

While defense prognosticators are more concerned about budgets, platforms, and national adversaries, we propose a modest thought experiment of shifting the language of defunding or disbanding the police to the military, and considering what that might mean in practice.

Defunding and disbanding are relatively easy to define. They do not mean that one must reject the notion that force is, under certain circumstances, a legitimate instrument of statecraft. Rather, both seek to roll back the accretion of missions or responsibilities that have little to do with a group’s original purpose. They represent a set of choices at one end of the spectrum of political possibilities rather than a definite map of the future.

Defunding the U.S. military would mean removing a variety of roles, functions, and missions from the Department of Defense and assigning them to other U.S. Government agencies. This requires investing in these organizations and their managerial capabilities, since one might argue that the reason Defense receives all the missions is that it is the only department with the management skills to complete the complex missions. If this is, in fact, the case, then it is a further demonstration that the longstanding project of degrading the state throughout the Anglo-American world has been far more successful than we believed.

For example, the State Department should play a larger role in our national security affairs, but that will require a very different foreign service, one that has a different conception of the role of the diplomat, is not tied to the same set of educational institutions (and their prejudices), and one whose personnel more closely resemble the nation that it serves. At the same time, the State and Defense Departments, as well as the National Security Council, must accept that America’s relationship with China is one of competition and cooperation rather than confrontation. Washington should not ignore the problems arising from China’s egregious handling of Hong Kong or the abominations committed against the Uighurs, but Americans are not going to war for any of these causes. Nor should such actions prevent both countries from seeking cooperation when their interests align, as with climate change or pandemic prevention.

Diplomacy, as well as economic power, will serve as the basis or our responses, and we need to refine those tools. Even in the context of the coronavirus pandemic, we can see that the inordinate investment in biological weapons research and chemical warfare during the Cold War has yielded a paltry dividend for a nation that cannot manufacture N95 masks nor have military MOPP (Mission Oriented Protective Posture) suits found use in hospitals forced to reuse Personal Protective Equipment (PPE). Like it or not, we will require Chinese assistance in manufacturing sufficient quantities of PPE and, hopefully, vaccines—much like we will need China’s cooperation in upscaling the production of green technologies to reduce humanity’s carbon footprint. Allowing agencies whose budgetary futures are not tied to only one conception of the U.S. relationship with China, armed conflict, is probably the only way to re-conceptualize U.S.-China relations without resorting to tired bromides of “isolationism” vs. “global leadership.”

Other agencies, most already in existence but perhaps some new ones, too, will also be vital in the future. The U.S. Agency for International Development would require additional personnel and funding to build state capacity and enhance resilience in developing nations, while coping with the challenges of external migration. Energy, though Advanced Research Projects Agency–Energy and the national labs, would need further resources to invest in climate change-mitigation and green-energy technologies, while the Commerce Department would assist in their diffusion and production around the world. The Department of the Interior could harness the Geological Survey to identify sources of minerals required for the mass production of new technologies while also coping with environmental degradation.

Beyond the agencies we traditionally associated with national security, besides providing food relief, the Agriculture Department would have to harness U.S. research and development to increase global food supplies despite adverse weather conditions. The Department of Housing and Urban Development could take the lead role in renovating America’s dilapidated or brittle domestic housing stock and public infrastructure. Meanwhile, the Health and Human Services Department would have to take its pandemic-management responsibilities seriously and maintain adequate stockpiles of materials (coordinating with the State Department when dealing with foreign suppliers like China). Furthermore, the Federal Emergency Management Agency would need to develop its capacity to respond to slow-moving environmental catastrophes and internal migration rather than sudden natural disasters.

Finally, financial institutions such as the Small Business Administration and Internal Revenue Service would require standing authorities to provide payroll protection, which is essential to putting the economy “on ice” again if future social distancing is required. Finally, the Federal Reserve should buy distressed private assets (both bonds and equities) or state and local debt when markets cannot absorb them. It could then write off worthless assets, while those that appreciate could be administered by a National Infrastructure Bank or Sovereign Wealth Fund to rebuild the country’s infrastructure and reduce wealth inequalities.

Defunding, rather than disbanding, offers the military at least one important advantage: a major role in shaping its future. If the military, like many police departments, wishes to shed some of the missions forced upon it, then the services can tell their civilian overseers what they can and cannot do. For example, defunding would allow the military to focus its energies on the task of warfighting rather than the pretense of being social workers with guns.

Disbanding, meanwhile, is the revolutionary option if the public and its leaders conclude that the military, as presently constituted is simply irredeemable and must be reconstructed. This has some advantages, not the least of which may be the elimination of cancerous inter-service rivalry over resources that makes “jointness” a uniform badge or billet rather than a reality or way of life. At the very least, we should abolish the service academies and reorient them as one-year officer candidate schools akin to Sandhurst in the United Kingdom. This would compel aspiring officers to attend civilian institutions prior to commissioning. We could also expand Reserve Officers’ Training Corps to all the Historically Black Colleges and Universities to ensure that officers come from a more representative array of institutions and social backgrounds.