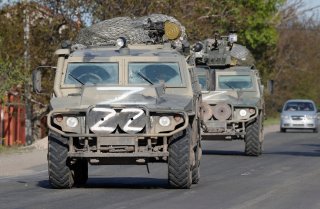 The Kremlin is making strategic use of fear and scare tactics against the Russian people, telling them they are in grave danger of being killed by NATO unless Russia defends them.

Mike Mears, the former director of human capital for the CIA, says analysis of Russian news reports reveals a “targeted” propaganda strategy that plays on the fear and uncertainty faced by many Russians who might think quite differently about the war if they had access to more information.

“[Russia is] using techniques with a very isolated singular message, striking fear into the native Russians that NATO is going to come after you, or some other crazy story for the night. By precluding all other information, and watching this on television, that's sort of the message that takes over … that only Putin can protect you. There [are] things to be worried about and fearful of, but only Putin can protect you,” Mears said in an interview with the National Interest.

Intercepted phone calls made public by Ukraine reveal how Russian soldiers have been manipulated as well. “The intercepted phone calls that I can see are those provided by the Ukrainian side. So, they obviously let the best ones out. But that's what you see … in those intercepts on the calls home is exactly that [manipulation],” Mears said.

In one intercept released by Ukraine and recalled by Mears, a Russian soldier tells his family that, after initially thinking he was coming to help Ukrainians, he realized they don’t want Russia’s “help” and have no interest in being taken over. In another call recounted by Mears, a Russian soldier remarks that he hasn’t seen any Nazis in Ukraine and doesn’t understand why he is risking his life and losing friends for the war.

Ukraine is doing a strong job of telling its story, but Russia’s move to “black out” Western news continues to have quite an impact on public opinion. While some within Russia are able to view Western news, experts say that countless Russians aren’t seeing Western coverage, raising questions about the troubling extent to which the Russian public is being lied to and manipulated.

“Each side uses a different method. And one of them is simply taking the truth and blowing it out in a form and story format—visually and so on. And then the other side, obviously, is using the worst of propaganda techniques,” Mears noted.

Interestingly, Mears cited a number of known instances in which individuals have simply used open-source research on available facts and information to essentially “disprove” and “negate” claims in Russian state-run media.

“Numerous times the Russians have gone out again with video or visuals and said such and such. And then somebody on the internet gets the GPS coordinates to show it was totally false, or they can show the bullets came from this side, not that side … so the story is totally false,” Mears explained.