Extremist Travel to Ukraine Is a Cause for Concern, Not Alarm 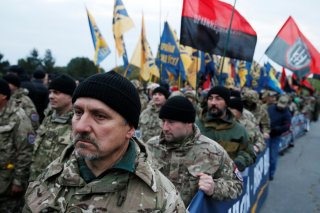 As Russian tanks rolled into Ukraine in February, so too did foreigners from around the world seeking to answer Ukrainian president Volodymyr Zelenskyy’s call for military volunteers. This influx of foreigners raised alarm among analysts that violent extremists, particularly neo-Nazis, could use the conflict as a new training ground. Complicating these concerns, Russian president Vladimir Putin painted Ukraine as a Nazi stronghold, arguing that his invasion is designed to “demilitarize and denazify” the Ukrainian government.

Putin’s claims complicate analysis of extremist travel to Ukraine in two ways. On the one hand, Russian propaganda channels could contribute to unfounded fears about extremists on the pro-Ukraine side of this conflict. Conversely, commentators could overreact in attempting to counter this cynical and opportunistic Russian messaging, ignoring a real problem in an effort to avoid feeding Russia’s war narrative. In this article, based on extensive open-source research, we seek to strike a balance between these two poles. We find that while some individuals with connections to violent extremism have indeed traveled to Ukraine, a mass influx of ideologically driven fighters has thus far not materialized. The problem bears watching lest violent extremists find haven on the battlefield, but the issue should be kept in proportion as extremely minor at present.

The Demographics of Western Combatants in Ukraine

As of March 2022, nearly 20,000 individuals had expressed interest in traveling to Ukraine to fight. This number might suggest parallels to previous flows of foreign fighters to Syria during its civil war and to Ukraine in 2014. But the reality on the ground is different, as the actual numbers do not match initial expressions of interest.

In evaluating current numbers, take Syria as an example. In the first six months of 2014, 12,000 foreign fighters from eighty-one countries joined the country’s civil war. And following Russia’s 2014 annexation of Crimea, 17,000 fighters from fifty countries poured into Ukraine. But, despite the large numbers expressing their intent to fight in Ukraine during the current conflict, the actual turnout of foreign volunteers has been far lower than expected. Researchers estimate that only several hundred people will go through with traveling to Ukraine to support its government, and even fewer will actually fight.

In addition to differences in numbers, differences in motives should also be acknowledged. Many of the foreign fighters who joined the Syrian Civil War and the 2014 Ukraine conflict were motivated by jihadism or violent white supremacism, respectively. But all available evidence suggests that the vast majority of foreigners now traveling to fight in Ukraine are not driven by ideology and that they are largely trying to enlist in official Ukrainian military units rather than sub-state militia groups.

Many who have joined the fight are military veterans who see supporting the Ukrainian government against Russia’s unprovoked invasion as a patriotic duty. A smaller subset includes thrill-seeking individuals. The number of ideological extremists is even less appreciable. To date, Western governments are aware of only an extremely small number of individuals with connections to violent extremism who traveled to Ukraine. German authorities, for example, say that the number of German nationals who fit into this category is in the single digits. Though U.S. authorities have not publicly commented, open-source evidence suggests the number is likely similar.

Violent Extremists Are Staying Away From Ukraine

We collected publicly available information on more than 200 foreign volunteers who traveled to fight in Ukraine between February and May 2022. Our research did not point to a significant ideologically motivated or extremist contingent. To help us assess the potential threat posed by the small number of individuals with connections to extremism, we analyzed the responses of domestic violent extremist networks to Russia’s invasion, as well as the military units and militias in Ukraine with a history of violent extremist agendas that have historically recruited foreigners.

Online violent extremist communities have demonstrated a powerful capability to mobilize members to violence. It is reasonable to believe this influence can also work the other way, possibly dissuading members from taking certain actions. It is true that some white supremacist networks have expressed solidarity with both the Ukrainian and Russian sides. Further, early on in the war, some of these networks encouraged support for Ukraine and discussed organizing travel to join the fighting. However, U.S.-based violent extremist networks and social media channels have largely encouraged members not to fight in Ukraine.

Rinaldo Nazzaro, the reported founder of the neo-Nazi accelerationist group The Base, vehemently discouraged his compatriots from traveling to Ukraine due to the risks of being identified and tracked by Western intelligence agencies or being killed in a “NATO proxy war.” Shortly after the Russian invasion, a prominent U.S. neo-Nazi accelerationist website stopped advocating for its audience to join the Azov Regiment (formerly known as the Azov Battalion before its integration into the Ukrainian National Guard). In some cases, transnational white supremacist extremist networks have followed suit. Other white supremacist networks have propagated their own slogans discouraging engagement in the conflict, including “No More Brother Wars,” which suggests that white people should not be fighting other white people.

The demand side of the equation is similarly not conducive to a flourishing Western extremist ecosystem in Ukraine. One individual who joined Azov Battalion in 2014 felt the unit perceived foreign volunteers as “backpacks”—burdens in need of constant attention in order to function. This attitude likely remains less than a decade later. Further, Western extremists in Ukraine are vastly outnumbered by international and Ukrainian volunteers, diminishing their impact and reducing their appeal to military units in Ukraine.

Even Ukrainian fighting units like Azov Regiment, whose leadership and members have prominently displayed an affinity for neo-Nazi ideology in the past, have tried to clean up their image. We are not arguing that this represents an actual shift in ideological orientation—such a determination is beyond the scope of this article—but public messaging has an impact on the recruitment of extremists. Azov has sought to steer its public narrative away from extremism, potentially to increase its appeal to Ukrainian recruits, many of whom say they joined the regiment because of its reputation as an elite force.

Overestimations of the extremist foreign fighter threat in Ukraine have drawn criticisms that examination of the phenomenon could advance Russian propaganda narratives. Moreover, Americans traveling to Ukraine to combat the Russian invasion are within their legal rights to do so. How do we balance countering Russian propaganda, respecting foreign volunteers’ legal rights, and detecting the small number of ideologically motivated extremists who seek to exploit the war in Ukraine? Though this latter category accounts for a fraction of a relatively minor whole, one lesson from the history of extremist foreign fighter engagement in conflict zones is that the significance and prevalence of such fighters can shift in short periods and that these individuals typically deserve nuanced attention.

The key to assessing the impact of extremist travel to Ukraine on the United States is neither to consider every foreigner traveling to Ukraine a neo-Nazi in training nor trend in the opposite direction and assume that all reports of ideological extremists flowing into the conflict are a construct of Russian propaganda. Doing either plays into Russia’s hands: Russian propaganda has in the past deftly exploited issues that Western media outlets seem to unjustifiably downplay.

As we have shown, the conflict in Ukraine has thus far not been a boon to violent extremists as many predicted it would be, and as Russian propaganda has sought to advance. But this does not mean the presence of violent extremists in Ukraine should be ignored. The United States should adopt a targeted approach to monitor and assess how the connections and skills that this small number of individuals might gain by participating in the conflict could influence the violent extremist landscape at home.

Ironically, if there is a significant problem with neo-Nazi foreigners on the battlefield, it can likely be found on the Russian side. Russian units like the Wagner Group’s Task Force Rusich and the Russian Imperial Movement have clearly-established and self-declared links to neo-Nazi ideology. They too should be a part of this discussion.

Daveed Gartenstein-Ross is the chief executive officer of the private firm Valens Global and leads a project on domestic extremism for the Foundation for Defense of Democracies (FDD).