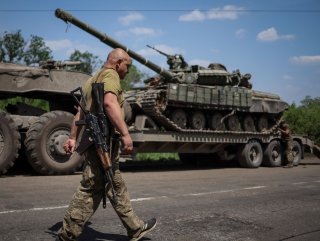 Putin visited the Exhibition of Achievements of National Economy (VDNKh) in Moscow to commemorate the 350th anniversary of the birth of Peter the Great, the first Russian emperor, on Friday.

“Peter the Great waged the Great Northern War for 21 years. It would seem that he was at war with Sweden, he took something from them. He did not take anything from them, he returned (what was Russia’s),” Putin said in remarks delivered after the event. “Yes, that’s exactly how it is … when he established the new capital [in St. Petersburg], none of the European countries recognized this territory as Russian, they recognized it as part of Sweden. However, from time immemorial, the Slavs lived there along with the Finno-Ugric peoples, and this territory was under Russia’s control. The same is true of the western direction, Narva and his first campaigns. Why would he go there? He was returning and reinforcing, that is what he was doing.”

“Clearly, it fell to our lot to return and reinforce as well. And if we operate on the premise that these basic values constitute the basis of our existence, we will certainly succeed in achieving our goals,” Putin added.

Putin, whose conception of Russia’s place in the world is deeply steeped in his reading of his country’s past, has often framed his policies in historical terms. The Russian president has previously compared himself with Alexander III, a conservative modernizer who sought to avoid foreign entanglements in order to focus on building up the Russian Empire’s industrial base and domestic institutions. Putin has spoken favorably of Pyotr Stolypin, the iron-fisted prime minister of Russia who ushered in a series of ambitious social, political, and economic reforms aimed at stopping and reversing the further disintegration of the Russian Empire in the early twentieth century.

Peter the Great, who waged a series of wars to secure the budding Russian Empire’s place as a European great power, is perhaps better suited as a source of wartime inspiration as Moscow digs in for a grinding conflict of attrition in Ukraine.

Yet there are deeper historical parallels implicit in Putin’s commentary. Peter was not always and instantly successful in every military endeavor, but he was dogged in his pursuit of what he defined as Russia’s core strategic objectives. He tempered his vision of Russia’s destiny as a dominant continental power with a realistic assessment of what he can achieve in the short term, eschewing maximalist wartime aims in favor of a piecemeal approach centered on gradually partitioning his rivals. The Great Northern War did, in fact, result in Russia’s undisputed dominance over the Baltics and propelled the Empire to great power status, but it dragged on for twenty-one years and was marked by a slate of early battlefield setbacks for the Russian forces. To the extent that he deliberately singled out the Northern War as an apt analogy for the current moment, Putin appears to be telling Russians to strap in for a prolonged conflict.

Since 2014, Putin has parsed Russia’s forays into Ukraine not as an annexation, but as the restoration of Russia’s rightful historical borders. Putin has long spoken of a special historical and spiritual connection between Russians and Ukrainians, whom he sees as essentially one people. His historical framing of the conflict is the latest indication that the Kremlin is not considering returning any of the Ukrainian territories that it currently occupies and could control in the future. Just like it didn’t matter to Peter whether or not the European powers recognized St. Petersburg as Russian, it doesn’t matter to Putin whether or not the West recognizes Kherson, Melitopol, Mariupol, and any number of further military acquisitions in Ukraine as Russian.

The underlying logic of his Thursday remarks, which came as the Russian Baltic Fleet conducted military drills in Russia’s central European enclave of Kaliningrad and the broader Baltic region, potentially applies to any territory that was previously held by the Russian Empire or the Soviet Union, including Finland, the Baltic States, and large swathes of Poland. “Today Putin said that Peter the Great wasn’t taking anything, he was taking it back, and that it is our responsibility also to take back and strengthen. That’s how he sees his mission - to take back what once was claimed by Russia. It’s a recipe for years of war,” tweeted former Swedish prime minister Carl Bildt.

Indeed, the thrust of the Russian president’s message extends far beyond the war unfolding in Ukraine. It speaks to the restoration of what Putin sees as Russia’s rightful place in the international system, supposedly stolen from it in the aftermath of the Soviet collapse through the loss of empire on the one hand and successive rounds of NATO expansion on the other. For the sixty-nine-year-old leader who is approaching his twenty-fourth year of rule, it has become a matter of personal legacy and national destiny to revise Russia’s standing in the post-Cold War global order.

As the war in Ukraine roils on with seemingly no diplomatic offramps, it risks becoming—like Peter’s Great Northern War—a long and bitter conflict with irrevocable consequences for Europe’s security architecture.