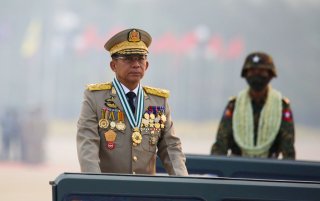 At least thirteen people, nearly all children, were killed in Let Yet Kone, a village in northern Myanmar (Burma), after the country’s ruling military junta bombed a school during a local counterinsurgency campaign, according to the United Nations Children’s Fund (UNICEF).

“On 16 September, at least 11 children died in an air strike and indiscriminate fire in civilian areas,” UNICEF announced in a statement on Monday. “At least 15 children from the same school are still missing.”

The airstrike in Let Yet Kone could mark the deadliest attack on Myanmar’s children since the country’s military coup in February 2021, which triggered mass protests. A military crackdown on the protests has led thousands of Burmese to join existing rebel groups, including many affiliated with the country’s ethnic minorities. The country’s northern Sagaing region, where the bombing occurred, has experienced heavy fighting in recent months, particularly between the junta’s forces and the ethnic separatist Kachin Independence Army (KIA).

A spokesman for the military junta claimed in a statement after the bombing that its forces had traveled to Let Yet Kone by air after receiving information that KIA fighters had massed in the area. The spokesman claimed that the rebels had used civilians as human shields and insisted that “necessary medical treatment” was provided to the survivors of the bombing.

However, a local villager interviewed by AFP insisted that the attack had been unprovoked.

“They just attacked the school,” he said. “They say someone attacked them, then they fought back—but this is not true.”

The villager added that the Burmese military had removed bodies from the school’s wreckage and detailed some villagers, including surviving children and teachers.

At least 2,300 civilians have been killed in the violence in Myanmar since February 2021. Tens of thousands more have been arrested, including President Win Myint and State Counsellor Aung San Suu Kyi, the country’s former leaders.

“Even in times of armed conflict, schools must remain areas in which children are granted protection and a safe place to learn,” Dujarric said, describing the attack on the school as a “grave violation” of international law.

“The Secretary-General reiterates that, under international humanitarian law, combatants must not direct attacks against civilians, including children, or civilian objects,” he added. “Perpetrators of all international crimes committed in Myanmar must be held accountable.”