'Mythic Quest’ Is a Great T.V. Show With an Even Better Movie in the Middle 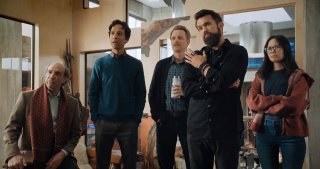 Because on the outside, Mythic Quest is a goofy workplace comedy about self-absorbed video-game developers trying, and mostly failing, to run a World of Warcraft-style online game.

But on the inside, there’s a powerful tragedy. And the show, whose first nine-episode season dropped in February 2020, waits just five episodes to reveal it.

The first four episodes of Mythic Quest are standard “peak-T.V.” fare. Which is not to say they’re not entertaining as Hell.

The main season arc is the Mythic Quest’s team’s efforts to woo “shithead” teenage livestreamers (whose millions of followers give them the power of life and death over game companies) while also managing a rogue NPC and keeping at bay a rival company with an EVE Online-style space game.

It’s fast-paced and funny and has a lot to say about video games, tech culture and toxic manhood. Mythic Quest for eight of its nine episodes is a really good show.

Then there’s episode five, directed by McElhenney and written by his sister Katie. You immediately know something’s up. The picture is softer, more cinematic. The music isn’t the normal brash horns. The title flashes “1993.” It’s a flashback. A man and a woman we’ve never met before are meeting-cute at an electronics store.

They are Doc and Bean, played by Jake Johnson and Cristin Milioti. Episode five is about Doc and Bean falling in love, creating a Silent Hill-style horror survival game and building a game company while struggling to hold onto their artistic integrity. They sell out. They break up. They learn in the end that the gaming industry breaks hearts.

It’s sweet, moving, tragic. And except for its 30-minute runtime, it’s practically a feature film. And it’s not until its final seconds that the episode connects to the wider Mythic Quest universe.

But connect it does. The sad story of Doc and Beans helps to explain, and contextualize, the hijinks of the show’s normal episodes. It’s incredible.

Fans of McElhenney won’t be surprised at the emotional turn Mythic Quest takes. McElhenney after all wrote the best and most moving episode of Sunny, the one where Mac comes out as gay to his uncaring father … by way of an interprative dance.

Some critics have argued that Mythic Quest is an okay series with one really good standalone episode in the middle. But episode five doesn’t stand alone. It’s the beating heart of an outstanding show.