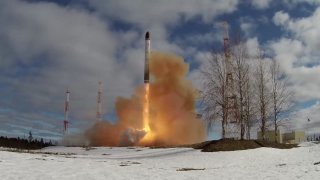 The Russian military has successfully conducted the first test launch of the Sarmat intercontinental ballistic missile (ICBM) from the Plesetsk cosmodrome to the country’s northwest, according to Russian state media outlet TASS.

"Today, at 15:12 Moscow time, a Sarmat silo-based intercontinental ballistic missile was successfully test-launched from a silo launcher at the Plesetsk state testing cosmodrome in the Arkhangelsk Region," reported TASS, citing a statement issued by Russia’s Defense Ministry. “The launch’s tasks were achieved in full. The designated characteristics were confirmed at all the stages of its flight. The practice warheads arrived at the designated area at the Kura proving ground on the Kamchatka Peninsula," the statement added.

RS-28 Sarmat, known in the West as “Satan II,” is one of the six new strategic weapons unveiled by Russian president Vladimir Putin during his 2018 state-of-the-nation address. Slated to be introduced into service later this year, the super-heavy, MIRV-armed Sarmat is widely considered the most capable ICBM in Russia’s arsenal. The Sarmat is intended to replace Russia’s Soviet-era R-36M2 Voevoda ICBM. "The new missile is capable of striking targets at long ranges, using different flight paths. The Sarmat features unique characteristics that enable it reliably to breach any existing and future anti-ballistic missile defenses," added Russia’s Defense Ministry. The Sarmat ICBM can carry hypersonic glide vehicles (HGVs), according to Russian defense officials.

The Sarmat launch marks one of the largest demonstrations of Russian nuclear capabilities since the invasion of Ukraine commenced on February 24.

The test could partially be an attempt to shift public attention away from the recent destruction of the guided-missile cruiser Moskva, the flagship of the Black Sea Fleet. The Pentagon assessed last week that Moskva sank within one day of being hit by two Ukrainian Neptune anti-ship cruise missiles.

The launch may also have been intended as a warning to Washington that Moscow will not tolerate direct Western military intervention in Ukraine. "This truly unique weapon will strengthen the combat potential of our armed forces, reliably ensure the security of Russia from external threats and make those who, in the heat of aggressive rhetoric, try to threaten our country, think twice," Putin said on Wednesday. "It has no analogues in the world and won't have for a long time to come," he added.

But the White House was unfazed by the launch. “Such testing is routine, and it was not a surprise. It was not deemed be a threat to the United States or its allies,” Pentagon spokesman John Kirby said. Former CIA chief of Russia operations Steve Hall described the test as “nuclear saber-rattling to CNN, adding that the threat of a Russian nuclear strike on the U.S. remains “extremely low.”