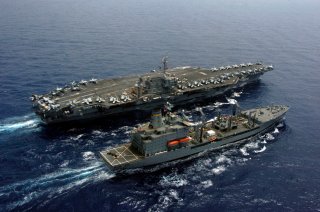 The U.S. Navy is perfecting how it reloads guided missile destroyers at sea that have expended their ammunition.

The Navy’s Military Sealift Command paired up the USS Spruance with the MV Ocean and experimented with how it delivers ammunition. Though the event was supposed to include reloading at sea, only pier-side reloading happened.

Cdr. Sean Robertson, a 3rd Fleet spokesman, explained to USNI News that “there was an open-ocean work scheduled. They did not do it. They had some safety concerns,” he said. “Because of excessive roll, they didn’t do the open-ocean transfer.”

It is unclear, however, if the U.S. Navy would try to reload Vertical Launch Cells while at sea. “They’re working out the after-action reports, and there will be a determination” at a later time, Commander Robertson said.

Reloading Vertical Launch Cells is a tricky operation and one that requires boxed missiles to be reloaded via crane. MK-41 Vertical Launch Cells cannot be reloaded while the ship is moving, and reloading operations are normally conducted while at port. This reloading inflexibility could make logistics during a wartime situation difficult, especially in the Pacific Ocean.

Considering the so-called tyranny of distance—the Pacific Ocean is the world’s largest—ships that have depleted their ammunition could be out of commission for days, if not weeks, as they travel to friendly ports for magazine refills.

“Those ships are gone for a month, basically. If the fight is only going to last a month or two, that means you get one use out of them and that means they’re out of action for the remainder of the war,” Bryan Clark, a senior fellow and director of the Center for Defense Concepts and Technology at the Washington, D.C.-based Hudson Institute told USNI News.

In order to keep ships loaded and closer to the front of operations, the U.S. Navy needs a reload capability much closer to the western Pacific, where a fight would be anticipated, rather than Hawaii or Guam.

Other creative solutions also exist but if the U.S. Navy wants to keep its ships armed, it will have to experiment more with reloading at sea.