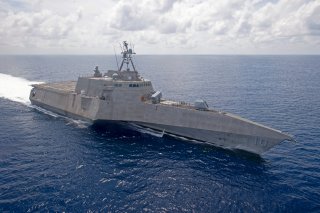 The Navy’s Littoral Combat Ship (LCS) will sail to fight another day, as the service continues to deliver restored and updated Freedom-class variant ships.

The ongoing production of LCSs points to a significant and easily overlooked reality that the ships—while their volume is being reduced due to what could be described as a survivability deficit in “blue water” maritime war—still have tremendous utility and combat value in several key operational spheres. This includes the LCS’ ability to carry out countermine missions and small boat defense and access port and coastal areas less accessible to deeper draft ships.

“The LCS is a fast, agile, mission-focused platform designed to operate in near-shore and open ocean environments, capable of winning against 21st-century coastal threats such as mines and swarming small craft. The ships are capable of supporting forward presence, maritime security, sea control and deterrence,” a report from Naval Sea Systems Command (NAVSEA) notes.

LCS 23, to be named the USS Cooperstown in the future, was recently delivered to the Navy. The ship is the twelfth Freedom-class variant of the LCS and, according to the NAVSEA report, the second Freedom-class ship outfitted with the “combining gear correction that will allow unrestricted operations.”

There have been ongoing discussions among senior leaders and members of Congress regarding the necessary funding and optimal fleet size for the LCS, and the Navy has sought to reduce the number of ships. Alongside this initiative, there is also a consensus that there are still significant operational functions for which the LCS is extremely well suited, particularly in littoral areas.

The ship is armed with guns and over-the-horizon missiles, as well as countermine technology and surveillance equipment. The ship is arguably still very well suited for coastal patrol, mine clearance, and defense against small boat attacks. The ability to defend against and destroy small boats in littoral waters is of unique significance to the Navy, and it is something that the Navy tested intensely many years ago.

More than five years ago, during the earlier phases of the LCS’ development, the ship’s program office assessed the LCS in a live-fire scenario against a swarm of small boats and found that the deck guns and targeting systems were effective against groups of attacking small boats. These capabilities would be of extreme value in areas where there is a substantial small boat threat, such as in shallow waters off the coast of Iran and the Strait of Hormuz. In many cases, deeper draft ships are simply unable to access certain littoral areas. Thus, an LCS might also be of value in island areas in the Pacific, such as the South China Sea.